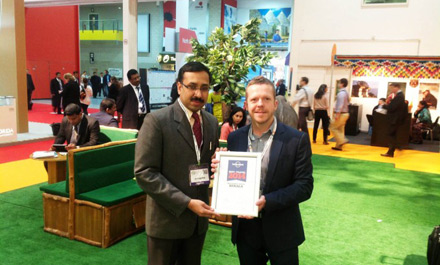 Travel guides publisher Lonely Planet has named Kerala among the world’s 10 best destinations for taking the family on a holiday in 2014.

The Lonely Planet’s award for the best family destination was bestowed on ‘God’s Own Country’ at the World Travel Mart in London, the world’s leading travel trade event attended by industry representatives from across the globe, a statement issued in Thiruvananthapuram said.

The World Travel Mart, which began on November 4, concluded on Thursday.

Kerala joined the likes of New York City, Denmark, Prague, Iceland, Italy and Hawaii in being described by the travel expert as a child-friendly destination ideal for the family.

“The intensity of travel in India could put you off taking a trip here with family, but Kerala is a family-friendly version, more laid back than other regions, greener, slower paced. There are also lots of national parks for elephant spotting, palm fringed beaches and boat trips along the lush canals of the backwaters,” it said.

Former South African cricketer Jonty Rhodes was among the thousands who visited the Kerala pavilion at the World Travel Mart. The pavilion showcased Kerala as the Home of Ayurveda.

Rhodes, who retired from international cricket in 2003, is a brand ambassador for South African Tourism.

“With the British economy registering the fastest growth in the last three years in the previous quarter, the mood at the World Travel Mart hosted by London was upbeat,” said Harikishore.

“The World Travel Mart presented us with a significant opportunity to target higher growth figures for Kerala tourism as far as foreign tourist arrivals are concerned,” he added.

The Kerala delegation included 12 co-exhibitors representing the hospitality industry of the state.