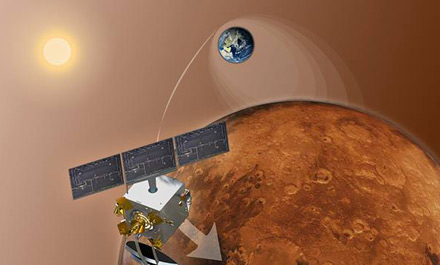 The Kerala State Science and Technology Museum in Thiruvananthapuram has drawn up various programmes to mark the entry of ‘Mangalyaan’, India’s Mars Orbiter Mission, into the orbit of the red planet, expected to happen on 24 September.

The programmes, planned in partnership with Rajya Sabha TV, Vigyan Prasar and CSIR, have been planned on 23 and 24 September, a Museum release said today.

A seminar on ‘Human Space Exploration’ is scheduled on 23 September. ISRO’s former Deputy Director P Radhakrishnan will lead the sessions, it said.

A quiz competition based on space explorations will also be organised for college students.

A team with two persons can participate in the event, it added. Mangalyaan is scheduled to leave the solar orbit and enter an orbit around Mars in the early hours of 24 September.