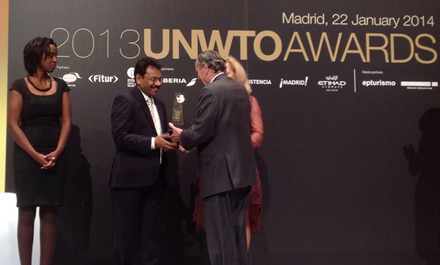 Kerala Tourism has been conferred the top United Nations Award for its global leadership in creating innovative initiatives for sustainable tourism, the first time India has ever won the recognition.

Kerala Tourism walked away with the top honours at the annual United Nations World Tourism Organisation (UNWTO) Awards for Excellence and Innovation in Tourism presented on January 22 in Madrid, the capital of Spain.

In its biggest international recognition to date, Kerala Tourism won the UNWTO Ulysses Award for Innovation in Public Policy and Governance, the highest honour given to government bodies for shaping global tourism policies through innovative initiatives.

Kerala Tourism was awarded for its path-breaking ‘Responsible Tourism’ project in Kumarakom, which has successfully linked the local community with the hospitality industry and government departments, thereby creating a model for empowerment and development of the people in the area while sustaining eco-friendly tourism.

The Kumarakom initiative had earlier won the National Award for Best Rural Tourism Project in March last year and also the PATA Grand Award for Environment.

“Kerala, a popular ecotourism destination, portrays responsible and sustainable tourism in an exceptional manner,” said UNWTO Secretary-General, Taleb Rifai, at the awards ceremony. “This recognition conferred upon the state is a great step towards creating a better understanding among other destinations of the principles we stand for,” he added, wishing Kerala Tourism “continued success”.

This is the first time India is figuring on the list of UNWTO Award winners.
Last year, the Ministry of Tourism of Malaysia had won the UNWTO Ulysses Award for Innovation in Public Policy and Governance for its Homestay Experience Programme. Previous winners in the category include Peru, Portugal and China. CNN’s Richard Quest was conferred the 2013 UNWTO Award for Lifetime Achievement, in recognition of his work as a business journalist reporting on the tourism industry.

Instituted in 2003 by UNWTO, the United Nations agency for the promotion of responsible, sustainable and universally accessible tourism, the UNWTO Awards showcase innovation and application of knowledge in tourism with the aim of effecting governance and society. The awarded projects are in line with the UNWTO’s Code of Ethics for Tourism and standards set in the UN Millennium Development Goals.

Kerala Tourism faced tough competition from other international contenders in the Public Policy and Governance category.

“We are humbled by the UNWTO’s decision to confer this highest international award on our state,” said Kerala Tourism Minister Shri AP Anilkumar. “It is a recognition of our continuing efforts to sustain global tourism, which can progress only if we consider the local community as our biggest partner,” he added.

“We are delighted that Kumarakom has become a model for sustainable tourism to the world,” said Kerala Tourism Secretary Shri Suman Billa, who received the Ulysses Prize at a glittering awards ceremony. “Our ‘Responsible Tourism’ model shows that the future of tourism lies in initiatives at the grassroots level,” he added.

“The UNWTO award also bestows upon us the added responsibility of working even harder in the future by achieving higher standards in practicing tourism,” Shri Billa said.

“The Kumarakom project has become successful because of the hard work by all its partners, from the local community to local hospitality organizations and local government departments to the state tourism department staff, and above all the support of our esteemed travellers from around the world,” said Kerala Tourism Director Shri S Harikishore.

The awarded projects at the UNWTO Awards this year represent some of the best examples of tourism leaders from around the world which through their exceptional initiatives have placed themselves at the forefront of the sector.

The awards ceremony was held at the International Tourism Trade Fair (FITUR), in Madrid.

The UNWTO Awards Ceremony was followed by the UNWTO Knowledge Network Symposium on January 23. The Symposium showcased the projects of winners of the UNWTO Awards in the different categories. It also included keynote speeches by the 2013 UNWTO Ulysses Prize and Lifetime Achievement laureates and a high level panel on knowledge management in tourism.

Kerala Tourism Secretary was one of the panelists at a UNWTO Knowledge Network Symposium session, titled, ‘Innovation in Tourism: Building Future in Tourism,’ held on January 23.

The UNWTO has 156 countries as its member-states besides 6 associate members and over 400 affiliate members representing the private sector, educational institutions, tourism associations and local tourism authorities.