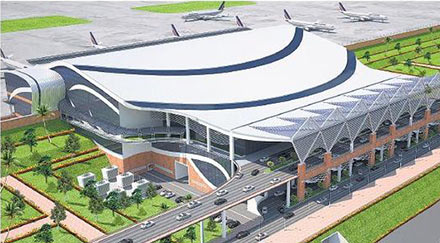 Kannur International Airport Limited (KIAL) to be a reality soon

The Kannur International Airport plans to launch commercial operations on May 24, 2016.

Trial runs are expected to begin in December this year.

The project, involving a capital expenditure of nearly Rs.1,900 crore, has attracted substantial investments from the Airports Authority of India (AAI) and only two per cent of the 16 per cent investments open to the public remained unsubscribed.

Non-Resident Keralites (NoRKs) are expected to use this window of opportunity.

The airport expects its catchment areas to be Coorg and Mysore in Karnataka and the northern districts of Kasaragod, Kannur, Wayanad, and Kozhikode.

The Airport has been planned for development in phases on a modular basis to suit future requirements and also to minimize the initial investments so as to generate revenue at the earliest possible time.

The State’s prestigious greenfield Airport project named ‘KIAL’ will be coming up close to Mattannur in Kannur district of Kerala State. It is only 20 kms away from Kannur city, and 2 kms from Mattannur on Kannur – Mattannur – Mysore road.

The Airport is strategically located with easy access from NH-17 and SH-30 & 36 . The main Railway line from Kanyakumary to Mumbai is nearest to Airport and it is situated  in between Thalasserry and Kannur railway station.