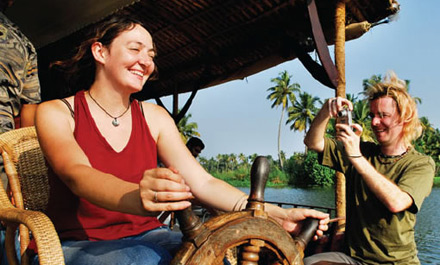 Increase in tourist arrival in Kerala

Foreign tourist arrivals to Kerala crossed eight lakh in 2013, an impressive eight per cent growth from the previous year.

According to the figures of the state tourism department, in 2013 a total of 8,58,143 holidayers from various countries visited different destinations of the state, known for its panoramic backwaters, tranquil beaches, hill stations and greenery all around.

This shows an increase of 8.12 per cent over the previous year’s figure of 7,93,696, the figures put on the state tourism department website said.
At the same time, domestic tourist arrivals to Kerala during the period was 1,08,57,811 against 1,00,76,854 in the previous year. A total of 7.75 per cent increase was registered in the number of total ‘desi’ tourists, it said.

The months of January and February witnessed the arrival of most number of foreign holidayers, while October and December had the highest inflow of domestic tourists, it said.

If tourist destinations in Thiruvananthapuram and Ernakulam districts topped in luring foreign tourists, those in Ernakulam and Thrissur had the highest number of domestic holidayers.

Total revenue (both direct and indirect) from tourism was Rs 22,926.55 crore during the period. An increase of 12.22 per cent was registered in this regard from the previous year.