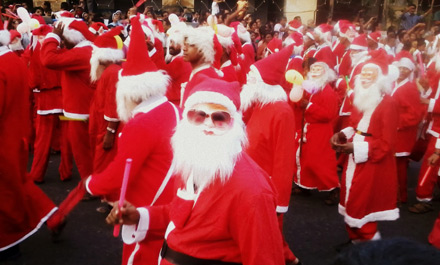 As church bells tolled signalling the moment of Nativity, faithful congregated for the Midnight Service in cathedrals and churches of various Christian denominations where senior bishops and priests conducted the special mass and gave out the Christmas message.

Leading the midnight mass at the St Mary’s Cathedral of Syro Malankara Catholic church in the state capital, Cardinal Mar Baselios Cleemis said “love, compassion and respect to each and every human being is the basic message of Christmas.”

Cardinal Mar George Alanchery of Syro Malabar Catholic Church led the service in Kochi and gave out the Christmas message.

The state, where Christians account for nearly one-fourth of the population, has been in the grip of festive mood for the last several days.

Churches and homes were tastefully decked up with cribs depicting the birth-in-the manger scene and stars twinkling on Christmas trees.

Most Keralite Christians, belonging to Catholic and Orthodox churches that follow Eastern traditions, claim that the message of Christ was preached to their forebears by Apostle St Thomas who landed at Kodungallur in Thrissur District in AD 52.

In the capital city, Arch Bishop M Soosai Packyam of the Latin Catholic hierarchy led the mass at the St Joseph cathedral.

Special prayers were also held in churches of CSI, Jacobite and Mar Thoma communities across the state.

Sumptuous feast was an important feature of the occasion in Christian homes containing the rich menu of Syrian Christian ethnic dishes apart from cakes and confectioneries.