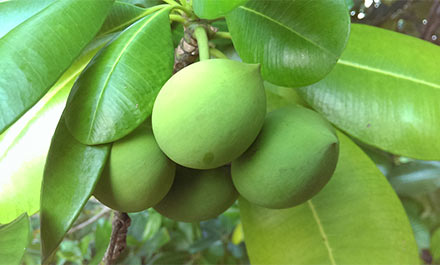 Cerbera odollam – All you need to know

Cerbera odollam, commonly known as the Suicide tree and Othalanga, is a species of tree native to India and other parts of southern Asia.  The tree grows along the sandy coasts, riverbanks and near mangrove swamps. It grows wild along the coast in many parts of Kerala, India, and has been grown as a hedge between home compounds.

The fruit, when still green, looks like a small mango, with a green fibrous shell enclosing an ovoid kernel measuring approximately 2 cm × 1.5 cm and consisting of two cross-matching white fleshy halves. On exposure to air, the white kernel turns violet, then dark grey, and ultimately brown, or black. The plant as a whole yields a milky, white latex. Cerbera odollam bears a close resemblance to oleander, another highly toxic plant from the same family.

All parts of the plant are poisonous. The seeds contain a heart toxin called “cerberin”,
similar in structure to “digoxin”, found in foxglove plants. Digoxin
kills by blocking calcium ion channels in heart muscles, which disrupts
the heartbeat, causing death. The toxic seeds are used as rat poison,
insect repellent or burned for light.

The seed can cause poisoning in humans and symptoms include nausea and vomiting. The poisoning may also result in hyperkalemia, which can cause death.

The fruits are used for manufacturing bioinsecticides and deodorants. The Bark, Leaves, Fruits, Latex of the Othalam is used for rabies, skin diseases and ringworm.