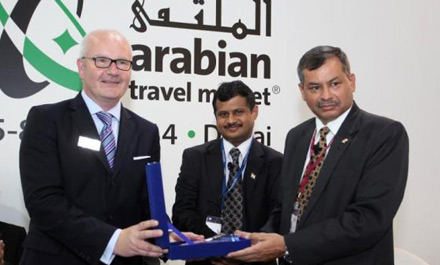 Arabian Travel Market (ATM) 2014, the region’s leading travel industry showcase, has named India as the recipient of the New Frontiers Award 2014 at a special roundtable seminar session held on the third day of the annual event.

“The people of northern India were faced with widespread devastation last year in the aftermath of not one, but two life-changing natural disasters, with the Uttarakhand floods and Cyclone Phailin causing wholesale destruction in the space of just five months,” said Walsh. “It took monumental effort and sheer determination on the part of regional and national government, as well as by people in the affected communities and beyond, to start the rebuilding process and get the local economy back on track; and this collaborative effort embodies the spirit of the New Frontiers Award,” he added.

The award was made in recognition of India’s ongoing efforts to rebuild physical infrastructure and its rural tourism economy in the wake of the June 2013 floods and landslides in the northern state of Uttarakhand, and the devastation wreaked by tropical Cyclone Phailin, which touched down in the northeast of the country in October. Significant fatalities and the displacement of more than 1.1 million people were further exacerbated by the destruction of entire communities and wholesale destruction of crops and farmland.

Accepting the award, Devender Singh from the Ministry of Tourism, Government of India, said, “Tremendous effort is being made at all levels in terms of rebuilding tourism infrastructure in the affected areas, from state government activity to financial support from the Government of India. It will be a long-term process and we have only just started to get back to normal, but we are optimistic for the future.”

According to the World Travel & Tourism Council’s (WTTC) Annual Economic Impact Data report, 2014 is expected to be a year of above-average growth for the country’s travel and tourism sector with a forecasted 7.3% growth in economic contribution.

Domestic tourism revenues rose by 5.1% in 2013 and are expected to increase by 8.2% in 2014, with domestic travel pegged as a key growth market. International visitor spend also increased by 6.2% in 2013 and further sector growth this year will be boosted by the proposed extension to the government’s visa on arrival and Electronic Travel Authorisation programme, which is set to cover tourists from 180 countries. Travel and tourism also continues to be an economic mainstay, contributing INR6,631.6bn in 2013 and generating 35 million jobs.

A major CSR initiative under the ATM brand, and now in its ninth year, the New Frontiers Award 2014 once again reinforced the overall focus of the programme, communicated under the theme ‘Recover, Repair, Rebuild’. Awarded to destinations that have overcome great adversity to bring much needed tourism back to their shores, the award also honours the strength and determination of the local people who work tirelessly to rebuild lives and communities following disaster as well as highlighting the crisis management capabilities of local tourism authorities.

“As well as acknowledging India’s efforts in tackling the immense challenge of rebuilding its agricultural as well as tourism infrastructure, this is also an invaluable opportunity for the industry to learn from the experience of past recipients such as the Philippines and Chile as they share their road to recovery stories,” remarked Walsh.

In addition to the prestigious crystal trophy, the New Frontiers Award comprises ATM exhibition space valued at US$10,000 along with additional marketing support in promoting the outstanding tourism opportunities offered by the recipient nation. India was honoured with the New Frontiers Award 2014 by a panel of judges consisting of industry professionals from across the globe. The awards shortlist also featured the Philippines (Central Visayas earthquake and Typhoon Haiyan) and Pakistan (Baluchistan earthquake), with all of the 2014 nominees undertaking repair, rebuild and recovery progammes, with efforts still ongoing in some destinations.