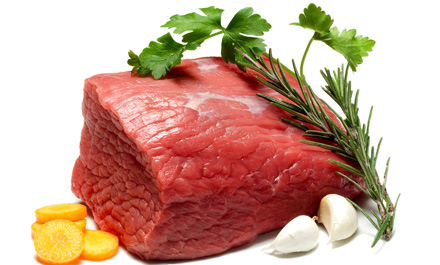 Why High-Protein Diets May Be Linked To Cancer Risk

Despite the popularity of protein-rich diets like Atkins and
Paleo, new research suggests that it may be wise to steer the opposite way,
especially when it comes to cancer risk. In the new study, middle-aged people
who ate protein-heavy diets had a markedly increased risk of dying from cancer
compared to their low-protein counterparts. But, as always, there are caveats:
Protein from animal sources – meat and dairy – was what largely produced the
risk, whereas plant-derived proteins seemed to be “safer.” And the rules seem
to be different for people over the age of 65.

So what are we to do?

“There’s a misconception that because we all eat,
understanding nutrition is simple,” said study author Valter Longo, director of
the Longevity Institute at the University of Southern California. “But the
question is not whether a certain diet allows you to do well for three days,
but can it help you survive to be 100?”

In the new study, the team followed over 6,300 adults over
the age of 50, to see what effect high-, medium-, and low-protein diets had on
longevity. A high-protein diet was defined as 20% of one’s daily calories
coming from protein, a moderate-protein diet is made up of 10-19% calories from
protein, and a low-protein diet consists of less than 10% protein. People in
the study ate, on average, 16% protein, with two-thirds coming from animal sources
– pretty typical of an American diet, the authors say.

Interestingly, when the source of the protein was taken into
consideration, things changed a bit. When animal-derived sources taken out of
the mix, the mortality risk was significantly reduced: In other words,
plant-based protein did not seem to present the same kind of problem as protein
from animal sources.

“The majority of Americans are eating about twice as much
proteins as they should, and it seems that the best change would be to lower
the daily intake of all proteins but especially animal-derived proteins,” said
Longo. “But don’t get extreme in cutting out protein; you can go from protected
to malnourished very quickly.”

Why the protein-cancer connection? Protein intake influences
the levels of the growth hormone IGF-I, which not only affects the growth of
healthy cells, but can also encourage cancer cell growth. In fact, in the
current study, the team found that for every 10 ng/ml increase in IGF-I, people
who ate high-protein diets were 9% more likely to die from cancer than those on
a low-protein diet.

This growth hormone mechanism seems to be the reason that
calorie-restricted diets have been shown to increase longevity in certain
species, including, possibly, humans.

But again, there are more caveats. IGF-I levels decline over
the years, especially after age 65, which is part of the reason that people
lose muscle tone and become frailer with age. And the current study bore this
out, too: When the team looked at people above the age of 65, people who ate
more protein had a reduced risk of death.

The protein issue is therefore complex, and will require
some more research.

But the recommendations arising from the current study, says
Longo, line up with those from the World Health Organization and the Institute
of Medicine. Longo tells me that generally people should stick with “plant
based proteins and/or stay as close as possible to 0.36 grams of protein per
pound of body weight per day. This is about 54 grams of protein per day for a
150-pound person… However, going lower than that can be detrimental.”

So, it may be wise to watch your protein intake, at least in
middle age. And at any age, eating a plant-based diet is probably smart, as
study after study shows the near-indisputable health benefits of doing so.

“Almost everyone is going to have a cancer cell or
pre-cancer cell in them at some point,” says Longo. “The question is: Does it
progress? Turns out one of the major factors in determining if it does is
protein intake.”