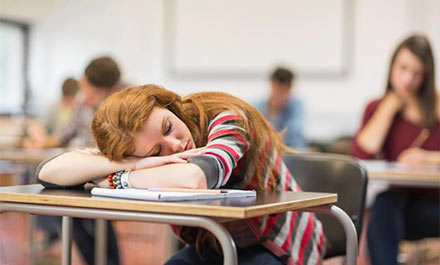 Teenagers Are Getting Less And Less Sleep, Study Shows

According to a new study, the number of teenagers experiencing sleep deprivation has increased dramatically over the last two decades.

The study which was conducted by the Columbia University’s Mailman School of Public Health states that the teens in the U.S. spend fewer hours asleep during nighttime than their peers did a couple of decades ago.

Katherine W. Keyes, assistant professor of Epidemiology at the Mailman School of Public Health and lead author of the study, said, “This finding implies that minority and low socioeconomic status adolescents are less accurately judging the adequacy of the sleep they are getting.”

For their study, the researchers analyzed a set of data collected during an annual survey called Monitoring the Future. This survey monitored more than 270,000 U.S. teenagers between 1991 and 2012.

They found that the sleep hours of an average teenager declined over the last two decades. According to the data collected in 1991, 72% of teenagers used to sleep more than 7 hours every night, while twenty years later the figure fell to 63%. The biggest decline in sleep hours was recorded between 1991-1995 and 1996-2000.

They also found that female students, racial/ethnic minorities and students of lower socioeconomic status are particularly affected, with teens in these categories less likely to report regularly getting seven or more hours of sleep each night compared with their male counterparts, non-Hispanic white teenagers and students of higher socioeconomic status, respectively.

Health experts warn that sleep deprivation within formative years may irremediably alter the cognitive functions and may trigger a cohort of health problems later in life.

“Although the underlying reasons for the decreases in hours of sleep are unknown, there has been speculation that increased Internet and social media use and pressures due to the heightened competitiveness of the college admissions process are adding to the problem. Declines in self-reported adolescent sleep across the last 20 years are concerning and suggest that there is potentially a significant public health concern that warrants health education and literacy approaches,” added Keyes.

The findings were published in the Pediatrics journal.