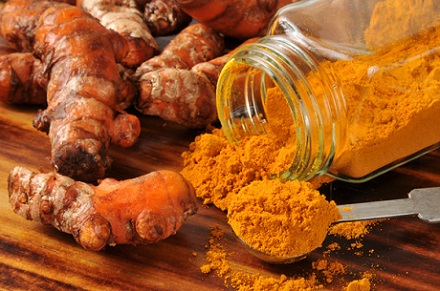 Turmeric, a member of the ginger family, is often found in curries and other spicy dishes from India, Asia, and the Middle East. The spice contains a compound called curcumin that has been used by Ayurveda practitioners for centuries to treat a variety of ailments.

It Has Beauty Benefits

Mix together a teaspoon of ground turmeric, a teaspoon of honey, and a teaspoon of milk. (Adjust the milk to get a thick paste-like consistency.) Turmeric’s anti-inflammatory properties may be soothing for sensitive or red skin.

A Potent, Yet Safe Anti-Inflammatory

The volatile oil fraction of turmeric has demonstrated significant anti-inflammatory activity in a variety of experimental models. Even more potent than its volatile oil is the yellow or orange pigment of turmeric, which is called curcumin. Curcumin is thought to be the primary pharmacological agent in turmeric. In numerous studies, curcumin’s anti-inflammatory effects have been shown to be comparable to the potent drugs hydrocortisone and phenylbutazone as well as over-the-counter anti-inflammatory agents such as Motrin. Unlike the drugs, which are associated with significant toxic effects (ulcer formation, decreased white blood cell count, intestinal bleeding), curcumin produces no toxicity.

Clinical studies have substantiated that curcumin also exerts very powerful antioxidant effects. As an antioxidant, curcumin is able to neutralize free radicals, chemicals that can travel through the body and cause great amounts of damage to healthy cells and cell membranes. This is important in many diseases, such as arthritis, where free radicals are responsible for the painful joint inflammation and eventual damage to the joints. Turmeric’s combination of antioxidant and anti-inflammatory effects explains why many people with joint disease find relief when they use the spice regularly. In a recent study of patients with rheumatoid arthritis, curcumin was compared to phenylbutazone and produced comparable improvements in shortened duration of morning stiffness, lengthened walking time, and reduced joint swelling.

Curcumin, the major constituent of turmeric that gives the spice its yellow color, can correct the most common expression of the genetic defect that is responsible for cystic fibrosis, suggests an animal study published in the Science (April 2004). Cystic fibrosis, a fatal disease that attacks the lungs with a thick mucus, causing life-threatening infections, afflicts about 30,000 American children and young adults, who rarely survive beyond 30 years of age. The mucus also damages the pancreas, thus interfering with the body’s ability to digest and absorb nutrients.

Researchers now know that cystic fibrosis is caused by mutations in the gene that encodes for a protein (the transmembrane conductance regulator or CFTR). The CTFR protein is responsible for traveling to the cell’s surface and creating channels through which chloride ions can leave the cell. When the protein is abnormally shaped because of a faulty gene, this cannot happen, so chloride builds up in the cells, which in turn, leads to mucus production.

The most common mutation, which is called DeltaF508, results in the production of a misfolded protein. When mice with this DeltaF508 defect were given curcumin in doses that, on a weight-per-weight basis, would be well-tolerated by humans, curcumin corrected this defect, resulting in a DeltaF508 protein with normal appearance and function. In addition, the Yale scientists studying curcumin have shown that it can inhibit the release of calcium, thus allowing mutated CTFR to exit cells via the calcium channels, which also helps stop the chloride-driven build up of mucus. Specialists in the treatment of cystic fibrosis caution, however, that patients should not self-medicate with dietary supplements containing curcumin, until the correct doses are known and any adverse interactions identified with the numerous prescription drugs taken by cystic fibrosis sufferers.

Curcumin’s antioxidant actions enable it to protect the colon cells from free radicals that can damage cellular DNA—a significant benefit particularly in the colon where cell turnover is quite rapid, occuring approximately every three days. Because of their frequent replication, mutations in the DNA of colon cells can result in the formation of cancerous cells much more quickly. Curcumin also helps the body to destroy mutated cancer cells, so they cannot spread through the body and cause more harm. A primary way in which curcumin does so is by enhancing liver function. Additionally, other suggested mechanisms by which it may protect against cancer development include inhibiting the synthesis of a protein thought to be instrumental in tumor formation and preventing the development of additional blood supply necessary for cancer cell growth.

Turmeric Teams Up with Cauliflower to Halt Prostate Cancer

Prostate cancer—the second leading cause of cancer death in American men with 500,000 new cases appearing each year—is a rare occurrence among men in India, whose low risk is attributed to a diet rich in brassica family vegetables and the curry spice, turmeric.

Scientists tested turmeric, a concentrated source of the phytonutrient curcumin, along with phenethyl isothiocyanates, a phytochemical abundant in cruciferous vegetables including cauliflower, cabbage, broccoli, Brussels sprouts, kale, kohlrabi and turnips.

The researchers believe the combination of cruciferous vegetables and curcumin could be an effective therapy not only to prevent prostate cancer, but to inhibit the spread of established prostate cancers. Best of all, this combination—cauliflower spiced with turmeric—is absolutely delicious! For protection against prostate cancer, cut cauliflower florets in quarters and let sit for 5-10 minutes; this allows time for the production of phenethyl isothiocyanates, which form when cruciferous vegetables are cut, but stops when they are heated. Then sprinkle with turmeric, and healthy sauté on medium heat in a few tablespoons of vegetable or chicken broth for 5 minutes. Remove from the heat and top with olive oil, sea salt and pepper to taste.

Research presented at a recent conference on childhood leukemia, held in London, provides evidence that eating foods spiced with turmeric could reduce the risk of developing childhood leukemia. The incidence of this cancer has risen dramatically during the 20th century, mainly in children under age five, among whom the risk has increased by more than 50% cent since 1950 alone. Modern environmental and lifestyle factors are thought to play a major role in this increase.

Childhood leukemia is much lower in Asia than Western countries, which may be due to differences in diet, one of which, the frequent use of turmeric, has been investigated in a series of studies over the last 20 years by Prof. Moolky Nagabhushan from the Loyola University Medical Centre, Chicago, IL.

“Some of the known risk factors that contribute to the high incidence of childhood leukemia are the interaction of many lifestyle and environmental factors. These include prenatal or postnatal exposure to radiation, benzene, environmental pollutants and alkylating chemotherapeutic drugs. Our studies show that turmeric—and its colouring principle, curcumin—in the diet mitigate the effects of some of these risk factors.”

In a recent rat study conducted to evaluate the effects of turmeric on the liver’s ability to detoxify xenobiotic (toxic) chemicals, levels of two very important liver detoxification enzymes (UDP glucuronyl transferase and glutathione-S-transferase) were significantly elevated in rats fed turmeric as compared to controls. The researchers commented, “The results suggest that turmeric may increase detoxification systems in addition to its anti-oxidant properties…Turmeric used widely as a spice would probably mitigate the effects of several dietary carcinogens.”

Curcumin may be able to prevent the oxidation of cholesterol in the body. Since oxidized cholesterol is what damages blood vessels and builds up in the plaques that can lead to heart attack or stroke, preventing the oxidation of new cholesterol may help to reduce the progression of atherosclerosis and diabetic heart disease. In addition, turmeric is a good source of vitamin B6, which is needed to keep homocysteine levels from getting too high. Homocysteine, an intermediate product of an important cellular process called methylation, is directly damaging to blood vessel walls. High levels of homocysteine are considered a significant risk factor for blood vessel damage, atherosclerotic plaque build-up, and heart disease; while a high intake of vitamin B6 is associated with a reduced risk of heart disease.

Tumeric’s cholesterol-lowering effects are the result of the curry spice’s active constituent, curcumin, which research reveals is a messaging molecule that communicates with genes in liver cells, directing them to increase the production of mRNA (messenger proteins) that direct the creation of receptors for LDL (bad) cholesterol. With more LDL-receptors, liver cells are able to clear more LDL-cholesterol from the body.

Growing evidence suggests that turmeric may afford protection against neurodegenerative diseases. Epidemiological studies show that in elderly Indian populations, among whose diet turmeric is a common spice, levels of neurological diseases such as Alzheimer’s are very low. Concurrently, experimental research conducted recently found that curcumin does appear to slow the progression of Alzheimer’s in mice. Preliminary studies in mice also suggest that curcumin may block the progression of multiple sclerosis. While it is still unclear how it may afford protection against this degenerative condition, one theory is that it may interrupt the production of IL-2, a protein that can play a key role in the destruction of myelin, the sheath that serves to protect most nerves in the body.

Whether curcumin can really slow down or even reverse the progression of Alzheimer’s disease needs to be studied properly.