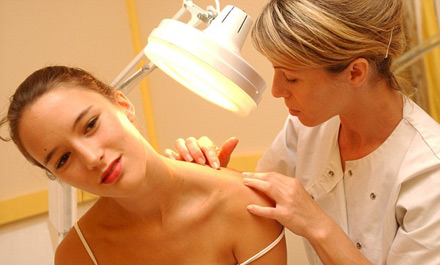 A new family of cancer drugs designed to block several key cancer-causing proteins at once could potentially treat incurable skin cancers, according to a new study.

Clinical trials to test the new drugs in patients should begin as early as 2015, researchers said.

Existing drugs target faulty versions of a protein called BRAF which drives about half of all melanomas, but while initially very effective, the cancers almost always become resistant to treatment within a year.

The new drugs – called panRAF inhibitors – could be effective in patients with melanoma who have developed resistance to BRAF inhibitors.

The new study, jointly led by scientists at The Institute of Cancer Research, and the Cancer Research UK Manchester Institute, showed that the new drugs – provisionally named CCT196969 and CCT241161 – stopped the growth of BRAF-driven melanomas, including those that had stopped responding to currently available BRAF-targeted drugs.

In addition, the new drugs halted tumour growth in cancers in which BRAF-targeted drugs had never worked in the first place – which happens in around 20 per cent of cases.

The researchers showed that these new drugs work because they target both BRAF and the growth pathways that the cells come to rely on when they become resistant.

The studies established that for both drugs, a dose of 20mg per kg per day – which when translated to humans would be achievable by taking in pill form – caused tumours to regress without significant side-effects.

“Melanomas often respond initially to the current generation of treatments, but they inevitably acquire resistance to them, and there is a desperate need for more effective options,” said study co-leader Professor Caroline Springer, Professor of Biological Chemistry at The Institute of Cancer Research, London.

“Our new inhibitors are the first in a new family of drugs that attack cancers without allowing them the get-out clause of drug resistance, by blocking multiple cancer proteins at once.

“We are very hopeful that clinical trials from this series of new inhibitors will begin very soon – and that they will ultimately become new first or second-line options for patients who, at the moment, exhaust all the available treatments and end up with fatal disease,” Springer said.

The study is published in the journal Cancer Cell.