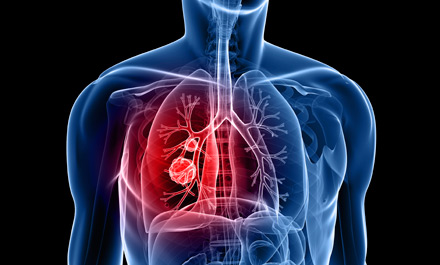 Lung cancer spread can be controlled by keeping cells bound together, says study

For the first time, scientists have shown how lung cancer cells break loose and spread around the body, paving the way for a potential drug target to stop the cancer from spreading.

Scientists took microscopic images showing that the protein ties tethering cells together are severed in lung cancer cells – meaning they can break loose and spread.

The researchers at the Cancer Research UK Manchester Institute discovered that the ties which lash cells together – controlled by a protein called TIAM1 – are chopped up when cell maintenance work goes wrong.

Healthy cells routinely scrap old cell parts so they can be broken down and used again. But this process spirals out of control in lung cancer cells, which scrap too many TIAM1 ties.

Targeting this recycling process could stop lung cancer from spreading by keeping the cells stuck firmly together.

“This important research shows for the first time how lung cancer cells sever ties with their neighbours and start to spread around the body, by hijacking the cells’ recycling process and sending it into overdrive. Targeting this flaw could help stop lung cancer from spreading,” said lead researcher, Dr Angeliki Malliri, at the Cancer Research UK Manchester Institute at the University of Manchester.

“Lung cancer causes more than one in five of all cancer deaths in the UK and it’s vital that we find effective new treatments to fight the disease and save more lives,” Nell Barrie, Cancer Research UK’s senior science information manager, said.

“Early-stage research like this is essential to find treatments which could one day block cancer spread – which would be a game changer,” Barrie said.

The research was published in the journal Cell Reports.