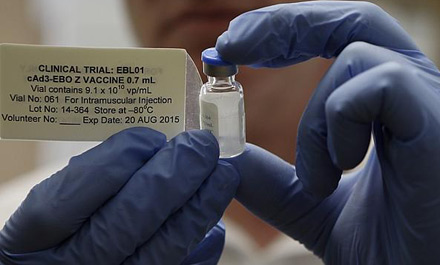 The first batch of an experimental Ebola vaccine has been shipped to Liberia, where the first large-scale trial will start within weeks, British pharmaceutical company GlaxoSmithKline (GSK) said on Friday.

Initially, about 300 doses of the vaccine, expected to arrive in Liberia on Friday, will be tested on health workers who care for Ebola patients. The trial will then be expanded to include 30 000 people throughout the West African nation.

The candidate vaccine has been tested in clinical trials involving 200 healthy volunteers in Britain, the United States, Switzerland and Mali, according to GSK.

“Initial data from these trials show that the candidate vaccine has an acceptable safety profile, including in a West African population, and across the different doses evaluated,” the company said.

The candidate vaccine uses a type of chimpanzee cold virus as a carrier to deliver benign genetic material from the Zaire strain of the Ebola virus, which is responsible for the current outbreak in West Africa.

Liberia has been one of the countries hardest hit by the Ebola outbreak with 8 478 reported cases and 3 605 deaths, according to the World Health Organisation.

The number of people who have become infected with Ebola has reached 21 724 worldwide, since the outbreak started in Guinea in December 2013, according to WHO.