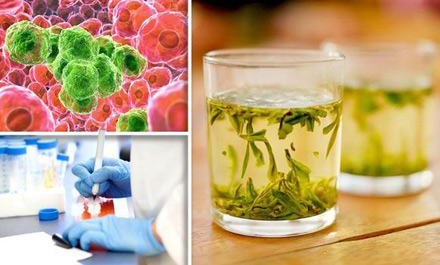 It has just emerged that American doctors have developed a cream to ward off skin cancer. The magic ingredient is green tea, which is well known for its cancer-fighting properties.

In fact, green tea has a whole host of other health benefits.

It can help speed up the metabolic rate because its antioxidant effect helps the liver to function more efficiently.

A recent U.S. study of overweight men found that, with no other changes to their diet or exercise regimes, drinking green tea three times a day burned up 200 extra calories a day. The green tea drinkers also found that their energy levels were greatly increased.

It has been shown to lower LDL (bad) cholesterol, because its potent antioxidant effects inhibit the oxidation of LDL cholesterol in the arteries.

A major cause of hypertension (high blood pressure) is an enzyme secreted by the kidneys called angiotension- converting enzyme (ACE).

When starch is consumed, it requires the enzyme amylase to break it down into simple sugars that can be absorbed in the bloodstream.

As it can kill bacteria, drinking green tea with meals may reduce the risk of bacterial food poisoning.

Drinking green tea – which is a natural anti-bacterial agent – with food may help kill the oral bacteria that cause cavities and bad breath.

Viral hepatitis is often triggered by high levels of iron in the liver. Green tea lowers iron levels throughout the body, so may have a direct anti-viral effect against certain strains of hepatitis.

Green tea can protect against cancer

A recent study found that antioxidants in green tea may prevent or reduce the severity of symptoms of rheumatoid arthritis.

Antioxidants in the tea inhibit the Cox-2 gene that triggers inflammation, working in much the same way as anti-inflammatory drugs.

Gargling with green tea boosts immunity to influenza and flu, according to a study in Japan.

A recent two-year study of a group of people aged 80 and over found that 96 per cent of those who drank ten cups of green tea a day showed no signs of cognitive impairment, compared to only 12 per cent who didn’t drink green tea.

Researchers in Japan have identified a compound in green tea that, in laboratory tests, blocks a key cell receptor involved in producing an allergic response.

The compound, methylated epigallocatechin gallate, works by blocking the production of histamine and immunoglobulin E, two compounds in the body that are chiefly involved in triggering and sustaining allergic reactions.