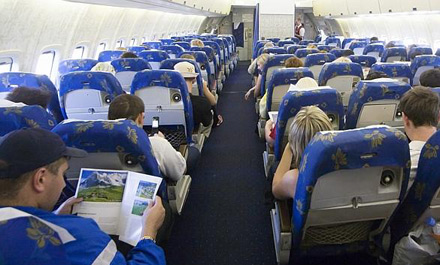 Everything you need to know about Ebola and travel

As the Ebola outbreak in West Africa worsens, airlines around the globe are closely monitoring the situation but have yet to make any drastic changes. Below are some key questions about the disease, what airlines are doing and how safe it is to fly.

Q: Why are airlines concerned?

A: Airlines quickly take passengers from one part of the globe to another. With some germs, one sick passenger on a plane could theoretically infect hundreds of people who are connecting to flights to dozens of other countries. Health and airline officials note, however, that Ebola only spreads through direct contact. Outbreaks of diseases that can spread through the air, such as the flu and severe acute respiratory syndrome, or SARS, are more problematic for airlines.

A: The Centers for Disease Control and Prevention issued a warning last week for Americans to avoid non-essential travel to West African nations with the outbreak.

A: Very much so. If contracted, there is no vaccine and no specific treatment. The World Health Organization on Friday said this is the largest and longest outbreak ever recorded of Ebola. About 1,700 people have been sickened in Guinea, Liberia, Sierra Leone and Nigeria; nearly 1000 people have died.

Q: How is Ebola transmitted?

A: The virus only spreads through direct contact with the blood or fluids of an infected person, according to the CDC. It can also be spread through objects, such as needles, that have been contaminated with infected fluids. No airborne transmission has been documented.

A: Since the outbreak erupted, the CDC has sent about two dozen staffers in West Africa to help try to track cases, set up emergency response operations and provide other help to control the outbreak. Last week, CDC officials said the agency will send 50 more in the next month. CDC workers in Africa also are helping to screen passengers at airports, according to CDC director Dr. Tom Frieden.

A: Yes. Immigration and health officials at airports as far away as India, Australia, Russia, the Philippines, Myanmar, Macedonia and elsewhere are screening passengers for signs of sickness or elevated temperatures.

Q: Do US airlines fly to West Africa?

A: Delta Air Lines flies to Dakar, Senegal; Accra, Ghana and Lagos, Nigeria. The airline also flies to Monrovia, Liberia, but for unrelated business reasons previously announced it will cancel that service at the end of September. Delta is letting passengers with flights to the region now until Aug. 15 push back travel until the end of the month. United Airlines also flies to Lagos, but has not issued any travel waiver. American Airlines does not fly to Africa.

Q: What are airlines saying about it?

A: There have been no flight cancellations in the US. All three airlines said they are in regular communication with government agencies and health officials and will follow their recommendations.

European carriers such as Air France-KLM, British Airways and Lufthansa all fly to Western Africa from their hubs in Paris, Amsterdam, London and Frankfurt.

British Airways announced Tuesday that it is suspending flights to and from Liberia and Sierra Leone until Aug. 31 “due to the deteriorating public health situation in both countries”. Passengers with tickets can request a full refund or a flight at a later date. The only other airline, so far, to cancel any flights is the Middle East airline Emirates. It has suspended its service to Conakry, Guinea, until further notice. It is still flying to Dakar.

Lufthansa notes that “there is no risk of getting infected by the Ebola virus via air circulation during flight.” Crews on Brussels Airlines flights have access to special thermoscans to check passengers’ temperature, if they feel it’s necessary. Air France has put an Ebola plan into action that includes medical protection kits and disinfectant gel available to the crew.

Passengers leaving Africa must fill out a questionnaire when entering the airport. They then have their temperature taken. They are only given a boarding pass if no symptoms are present.

Q: Has the airline industry dealt with any outbreaks in the past?

A: In 2003, there was a global outbreak of severe acute respiratory syndrome, or SARS. The disease was first reported in Asia but quickly spread to more than two dozen countries in North America, South America and Europe. Unlike Ebola, SARS can spread when an infected person coughs or sneezes. During the 2003 outbreak, 8,098 people worldwide became sick with SARS; 774 of those died. Airports started screening incoming passengers for fever. The disease was devastating for airlines because fearful passengers stayed home.