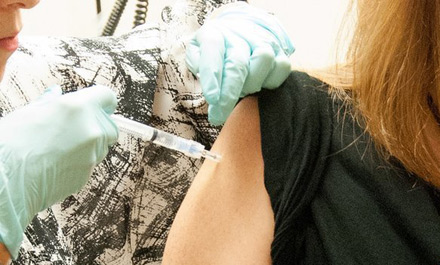 The first test of an Ebola vaccine in people shows it’s safe and appears to be working as designed, doctors reported Wednesday.

A look at the first 20 people injected with the vaccine, which has been shown to protect monkeys from Ebola, shows no dangerous side effects. And it seems to be producing an immune response that would be expected to protect them from infection.

“This response is very comparable to the level of the response that actually protected the animals,” said Dr. Tony Fauci, head of the National Institute for Allergy and Infectious Diseases, which helped develop and test the vaccine.

Ebola is raging through Sierra Leone, Liberia and Guinea. It’s infected more than 15,000 people and killed 5,000 of them. Experts have fast-tracked vaccines and treatments for Ebola because of the epidemic, even though they know they won’t be able to use them any time soon to try to control it.

The hope is to be able to make enough vaccine to at least protect health care workers fighting the epidemic.

NIAID is working with vaccine maker GlaxoSmithKline to develop this vaccine, which uses a common cold virus called an adenovirus that normally infects chimpanzees. It doesn’t cause any symptoms in people. It’s genetically engineered with a small piece of Ebola virus and, in theory, should prompt the immune system to recognize and attack Ebola.

There’s no ethical way to vaccinate people and then expose them to Ebola on purpose, of course, so the trial is designed to see if the vaccine is safe and if the immune system responds in a way that would be expected to protect them. It did, the NIAID researchers report in the New England Journal of Medicine.

“We know from previous studies in non-human primates that CD8 T-cells played a crucial role in protecting animals that had been vaccinated with this NIAID/GSK vaccine and then exposed to otherwise lethal amounts of Ebola virus,” said Dr. Julie Ledgerwood, an NIAID researcher who led the trial.

“The size and quality of the CD8 T-cell response we saw in this trial are similar to that observed in non-human primates vaccinated with the candidate vaccine.”

The real test will come if and when the vaccine is used to protect doctors, nurses and other health care workers who treat actual Ebola patients. They are at especially high risk. The World Health Organization says 588 health care workers have been infected with Ebola and 337 have died of it.

WHO officials hope to be able to use at least one of the vaccines to start immunizing health care workers by January.

“Based on these positive results from the first human trial of this candidate vaccine, we are continuing our accelerated plan for larger trials to determine if the vaccine is efficacious in preventing Ebola infection,” Fauci said.

The worst side-effect was a brief fever in two volunteers who got a high dose of the vaccine.

“That is not unexpected with some vaccines. In fact you get that with a lot of different vaccines,” Fauci told NBC News. It doesn’t mean anything harmful has happened but shows the immune system has been stimulated.

“The good news is that the fever was very transient. It lasted less than 24 hours.”

Several Ebola vaccines have been in the works for years. But until this current epidemic in West Africa there wasn’t a real push to bring such a vaccine to market and the main source of funding was U.S. biodefense programs aimed at protecting against a biological attack.