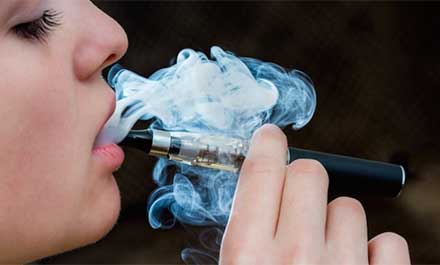 American Association for Cancer Research and American Society for Clinical Oncology said that e-cigarettes should be subject to the same Food and Drug Administration (FDA) restrictions as tobacco.

Electronic cigarettes may not be that safe after all, as a new study suggests that emissions from e-cigarette can actually damage lung cells.

According to the research by University of Rochester, e-cigarettes create harmful free radicals and inflammation in lung tissue and were likely a toxic replacement for tobacco products.

The investigation suggested the harm begins when the e-cigarette’s heating element is activated. The heating element is designed to turn a liquid solution (known as an e-liquid or “juice”) into an aerosol that mimics cigarette smoke. The inhaled vapors contain heavy metals and other possible carcinogens in the form of nanoparticles – tiny particulate matter that can reach farther into lung tissue, cell systems, and blood stream.

It was also found that toxic metals and oxidants from e-cigarettes raise safety concerns as well as potential pollution hazards from second-hand exposures and disposal of e-cigarette waste. Another recent study connected e-cigarette vapors to a higher risk of respiratory infections in young people.

In a joint statement, the two leading cancer organizations in the United States – the American Association for Cancer Research and American Society for Clinical Oncology – said that e-cigarettes should be subject to the same Food and Drug Administration (FDA) restrictions as tobacco until more is known about possible adverse health effects. Insufficient data also exists on the value of the tool for smoking cessation.

The biggest concern is for e-cigarette users under age 18. Health experts believe e-cigarettes entice some young people to start smoking and will make it socially acceptable again. E-liquid flavorings marketed to kids and teens include fruit, dessert, and candy, and are widely available at convenience stores, gas stations, and online.

Rahman’s study notes that manufacturers typically don’t disclose all materials and chemicals used to make e-cigarettes and e-juices. Without that information or long-term use studies, consumers have limited information about the potential dangers for human health and the environment, he said.