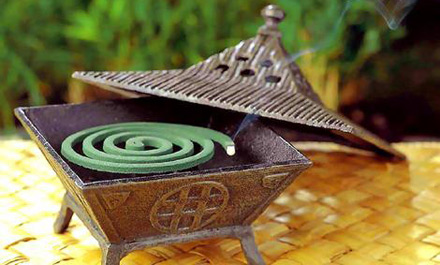 Could mosquito coils and incense sticks be killing you?

Love burning incense sticks? Or simply prefer using mosquito coils to get rid of those biting bests? Well, it might not be the healthiest idea. According to a recent finding, both incense sticks and mosquito coils contain carcinogens and have been found to be cancer causing. Dr Sundeep Salvi,  director of Chest Research Foundation, Pune, said at the 48th National Conference of Indian College of Allergy, Asthma and Applied Immunology at JSS Hospital, that  research by the foundation had shown that mosquito coils and incense sticks contain carcinogens, while studies in Taiwan and China had established their link with lung cancer. ‘Burning one mosquito coil in a closed room amounts to smoking roughly 100 cigarettes,’ said  Dr Salvi.

How and why are incense sticks and mosquito coils dangerous?

Incense sticks, when burnt emit a toxic smoke that contains lead, iron and magnesium. While, mosquito coils emit the pesticide ‘pyrethrin’ in mosquito coils is harmful for the lungs. And the no-smoke variety may have less particulate matter, but they emit a high level of carbon monoxide, which is unsafe for the lungs.

How was the study conducted

Dr Salvi said the the foundation had performed the research in 22 villages near Pune, where they found that 65 percent houses kept both their doors and windows closed while using mosquito coils, which was very dangerous for their health.