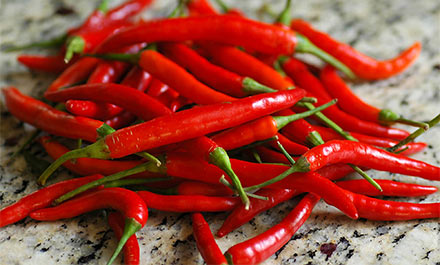 Chili peppers contain an ingredient that may cause weight loss and fight fat.

There is good news for those who find it hard to resist fatty foods. An ingredient found in chili peppers could help you prevent weight gain after eating a high-fat diet, a study involving an Indian-origin researcher has found.

As capsaicin—the chief ingredient in chili peppers – stimulates energy burning, a dietary supplement could be developed to do away with restriction in calorie intake, the findings suggest.

“Our group’s laboratory data revealed that dietary capsaicin suppresses high-fat-diet-induced obesity,” explained Vivek Krishnan, a graduate student from the University of Wyoming in the US.

“In our bodies, white fat cells store energy and brown fat cells serve as thermogenic (heat produced by burning fat) machinery to burn stored fat. Eating calorie-rich food and a lack of physical activity cause an imbalance in metabolism that leads to obesity,” Krishnan explained.

Developing a natural dietary supplement as a strategy to combat obesity can be easily advanced to human clinical trials.

“We envision a nanoparticle-based sustained-release formulation of capsaicin, which is currently under development in our laboratory,” the researchers added.

”In turn, this will advance a novel dietary supplement-based approach to prevent and treat one of the life-threatening diseases, obesity and its associated complications—in humans,” they noted.

The findings were presented at Biophysical Society’s 59th annual meeting in Baltimore, Maryland.