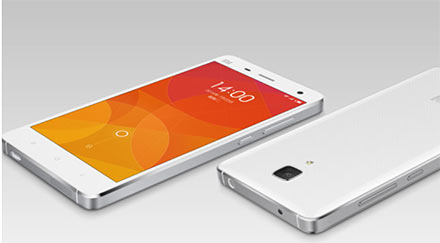 Xiaomi has officially invited the press revealing that it would be launching its most awaited gadget, the Mi 4 smartphone in India at an event in Delhi, on January 28. As per the reports the expected date of the launch is 28 January.

The Cricket World Cup 2015 is about to begin, and keeping it in mind, Xiaomi has fascinatingly linked the same message with its new launch. The new image revealed by the mobile company shows the arrangement of three Mi 4 smartphones arranged in a manner, which looks like the stumps. Also the message says Mi4 hits a 4 and a 6. Specialists also take this message as an indication of a special tie up of the Chinese company with the sport event.

Xiaomi launched the Mi 4 last year in other countries. The phone has a 5-inch IPS display with 441 ppi and 1920 x 1080 pixel resolution. The phone is pre installed with Android 4.4.3 KitKat OS with an MIUI skin. It is powered with a 2.5 GHz quad core Snapdragon 801 processor. It is endorsed with a Corning Gorilla Glass 3 for safety. The handset has a splendid 13 MP rear camera with LED Flash along with the 4K video recording and Sony IMX214 BSI sensor feature. It also has a sensational 8MP front camera with the Sony Exmor R sensor. Also the phone has a huge battery of 3,080 mAh along with a 3 GB RAM. The gadget measures 139.2 x 68.5 x 8.9 mm and weighs approximately 149 grams.

Xiaomi Mi 4 would be launched on Flipkart and it is expected that the stock would conclude within few minutes, like Xiaomi’s earlier devices. The major concern for the customers this time would be the price tag, as the phone is bit costly with respect to the other models launched earlier. The expected price would lie around Rs. 20,000.