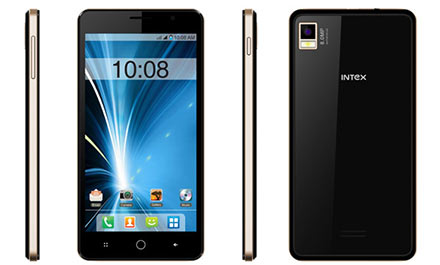 Local manufacturers in India and China might be at the forefront of offering impressive hardware at rock bottom prices, but they have never been very serious when it comes to the software, with most budget smartphones never seeing a software update in their lifetime. It’s also not common to see them launch low-cost smartphones with the latest version of Android before major manufacturers, but Indian OEM Intex is changing that trend with a new phone called the Aqua Star L.

The Aqua Star is the first smartphone from India to run Lollipop out of the box, and it’s also the cheapest device in the world to offer the latest and greatest of Android at INR 6,990, which equates to roughly $115. For that price, the hardware includes a 5-inch FWVGA (854×480) display, a 1.3GHz quad-core processor, 1GB of RAM, an 8-megapixel rear camera, and a 2-megapixel front shooter.

There’s also 8GB of internal storage that can be expanded using a microSD card, dual SIM support, and a 2,000mAh battery. These specs aren’t too impressive by any standard, but with the best version of Android powering the software, the Intex Aqua Star L is certainly a notable handset that could find a few buyers as a result.

The Aqua Star L is slated to go on sale in India on February 16 in black and white color options.