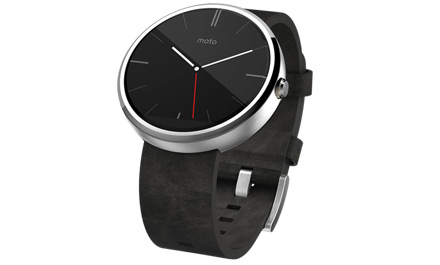 The smartwtach was unveiled in India early this month alongside the second-generation Moto G and Moto X smartphones, but it goes on sale in India starting October 3, Friday.

According to Motorola, the Moto 360 will initially be in limited stock on Flipkart, and more stock will be available in two weeks.

Motorola’s Moto 360 smartwatch, which is the most expensive Android Wear smartwatch (available in India), will compete with the LG G Watch and Samsung Gear Live in India. The LG G Watch is priced at Rs 14,999, while the Gear Live carries a price tag of Rs 15,999 in India.

Motorola’s new smartwatch is compatible with most devices running Android 4.3 or above. It has a 1.5-inch display (320×290 pixels), built-in heart rate monitor, and pedometer. The Moto 360 is waterproof up to 3.3 feet for up to 30 minutes, claims Motorola.

The Moto 360 supports wireless charging amd Motorola says the smartwatch can run a day on a single charge.

With just a twist of the wrist you can see who’s emailing or calling, what time your next meeting is or a friend’s latest social post.

Moto 360 also responds to your voice. Just say “Ok Google” to ask questions what time your flight leaves, or to get stuff done like scheduling an appointment, sending a text, setting an alarm or taking a note.