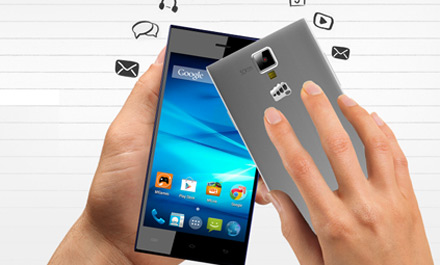 Micromax Canvas Xpress A99 unveiled in India for Rs 6999

Under the hood, it houses MediaTek quad-core processor backed by 1GB RAM, 8GB inbuilt memory (expandable up to 32GB), 1,960mAh battery which can run the device for up to seven hours of talk-time and close to 240 hours under standby mode.

One of the stand-out features is the HotKnot, a MediaTek’s NFC-like application. By just tapping the devices via screen-to-screen or connect the devices through touch, user can pair them instantly and share images, videos, music and browser URLs.

According to the reports, Micromax Canvas Express A99 will made available exclusively on Flipkart for ₹6,999 on 8 December.

The new Micromax Canvas Express A99 will up against the likes of popular Motorola Moto E, Android One series devices (Micromax Canvas A1, Spice Dream UNO and Karbonn Sparkle V), Asus Zenfone 4 series, Huawei Honor Holly, Xolo One, many other budget smartphone in the market.