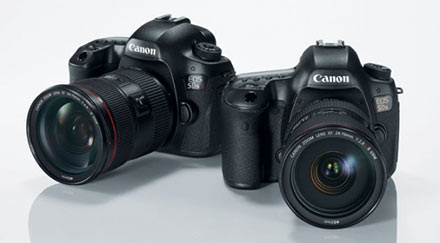 Canon made a slew of camera announcements ahead of next week’s CP+ show in Yokohama, but none are more bold than a pair of full-frame SLRs. The EOS 5Ds and 5Ds R are twins in terms of form. Both feature full-frame, 50-megapixel image sensors, but the R version of the camera includes an additional filter that offsets the blurring effects of the optical low-pass filter (OLPF). The net result is images that are crisper and show more detail, but that can show the effects of color moiré in certain situations.

Aside from that, the cameras are identical. Both feature a body that’s similar in size and handling to the EOS 5D Mark III$3,099.00 at B&H Photo-Video, including the same 61-point autofocus system. The camera is powered by dual Digic 6 image processors, uses a 150k RGB meter, and also has dual memory card slots—one for CompactFlash and one for UHS-I SD cards.

Canon isn’t positioning the 5Ds as a camera to capture fast-moving action, but it can still shoot at a decent 5fps rate. Its viewfinder has the same information overlay functionality as the one found in the EOS 7D Mark II$1,799.00 at B&H Photo-Video, and can capture Raw images at reduced resolution (28 megapixels or 12.4 megpaixels) in order to reduce file size.

The high-resolution sensor design doesn’t lend itself to video recording, as downscaling to 1080p compromises quality. But the 5Ds does support recording to a memory card at the standard frame rates from 1080p24 through 1080p60. Clean HDMI output is not available, and the camera cannot autofocus during video capture. There is a timelapse mode that can compress up to 100 hours of action into a 2.5-minute video.

The company is also updating its consumer SLR lineup with two new Rebel models. The EOS Rebel T6s and T6i share a lot of features. Both use a 24-megapixel APS-C image sensor, 3-inch vari-angle touch display, and include integrated Wi-Fi with NFC. The autofocus system is the best that Canon has included in the Rebel line, a 19-point design that uses all cross-type sensors, and 5fps shooting is supported. Video is captured at up to 1080p60 quality, and clean output via HDMI. The cameras don’t offer the Dual Pixel AF that Canon includes in its EOS 70D$1,099.00 at B&H Photo-Video and 7D Mark II cameras, but the Hybrid CMOS AF III system that it does use is improved from the similar system used by the svelte EOS Rebel SL1$449.00 at Amazon. Canon showed a side-by-side video of a subject approaching both the T6s and SL1 simultaneously and the new camera did a much better job keeping the subject in focus.

The T6s has a few features that aren’t found on the T6i. Its body has a top monochrome LCD, a locking mode dial, an electronic level and a rear control wheel. It can track subjects via Servo AF when set to Live View mode, and includes HDR video recording and a digital zoom (3x to 10x) when capturing video.

There’s one new lens coming, an ultra-wide zoom for full-frame cameras. TheEF 11-24mm f/4L USM is the widest rectilinear lens available, covering a 126° diagonal field of view. Its complex optical design incorporates 16 elements in 11 groups, including aspheric elements. It can focus to 0.28 meters and supports rear drop-in filters. It’s priced at $3,000 and ships in February.

Canon is also announcing the development of a new 1-inch compact, the PowerShot G3 X, with a 25x zoom lens (24-600mm). A prototype will be shown at CP+, but no further details are available at this time.