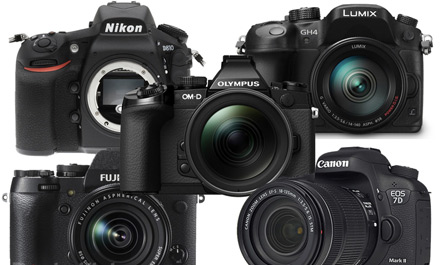 It’s been another great year for system cameras, with some outstanding products brought to the table. Canon’s EOS 7D Mark II offers some brilliant top features, Fujifilm X-T1’s delivers greatness in a classic camera and the Panasonic Lumix GH4 is a force to be reckoned with.

After much deliberation and some tough decisions, here are the five nominations for the Best System Camera 2014.

The Canon EOS 7D Mark II took five years to supersede its predecessor but it brought an updated 20.2-megapixel sensor, brand new 65-point autofocus system, burst shooting to a maximum 10 frames per second, and other top features such as faster processing and Full HD video capture.

There is no Wi-Fi on board and no 4K video capture either but overall Canon has taken the APS-C camera concept and delivered a model no competitor can quite match in this class. It might not reinvent the wheel or be exciting per se, but it builds from a strong foundation and solidifies that into an even more concrete photographic tool.

The Fujifilm X-T1 brings with it a classic style all full of knobs and dials that is reminiscent of models from earlier within the company’s 80-year-long history. It offers a brilliant giant viewfinder, excellent image quality and a solid build with weather-sealing.

The battery life could be better and the autofocus needs a little refinement but overall, the X-T1 is a shining example of how a retro style camera should be done. It’s not without some serious competition but Fujifilm’s tough enough to stand its own ground and we loved the images we got straight from camera.

The Nikon D810 is the successor to the D800 and like Canon, Nikon made its fans wait a couple of years. The D810 embodies the same 36.3-megapixel resolution but with various technical tweaks that promised better results.

It is Nikon’s best DSLR camera in our opinion and even though it has a couple of minor bumps, such as the video capture that isn’t as advanced as it could be, that can’t trounce the list of impressive points. Complex, versatile and always outstanding is the Nikon D810 in a nutshell.

The Olympus OM-D EM-1 is a small and light interchangeable lens camera that is as complete as they come. It has outstanding image quality, a super-fast autofocus, great electronic viewfinder, a solid build and lots of customisation and function buttons.

The battery life might have its limitations and it isn’t the cheapest model around but the OM-D EM-1 is a credible bit of kit. It’s a camera that’s not only visually stylish but a classy performer too and as an accomplished all-rounder, then there’s arguably no better option in this category.

The Panasonic Lumix GH4 offers 4K video capture at usable frame rates, which on paper, is untouchable at this level. It is also fast in all conditions, the movie mode is as good as it gets  and it comes with a silent electronic shutter option, a fully featured screen and electronic viewfinder.

The GH4 sees the GH series finally land with a bang. It’s not a budget device, but there are points of brilliance throughout all its important areas. The best-in-class video mode makes the GH4 one serious camera to be reckoned with.

Voting for your favourite

Voting in the 11th annual O2 Pocket-lint Awards is now open so you can let us know which one of these great devices you think should win the Best System Camera 2014 award and give us your verdict on all the other tech across the 13 select categories.