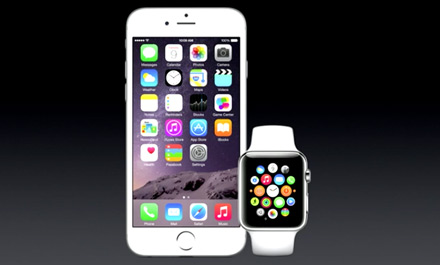 Apple takes the lead in the health and fitness race

Apple revealed its much anticipated Apple Watch on Tuesday, and while reviews are mixed (we won’t get in to the aesthetics), there are some notable health and fitness features that the company believes could make the device a game changer in the “wearable tech” world.

Not withstanding some silly things like the ability to send your heartbeat to friends, the Apple Watch is designed to not only collect information about physical activity, but it makes it easy to feed that information to a burgeoning ecosystem of health and fitness applications.

This was foreshadowed earlier this year at Apple’s Worldwide Developers Conference, when it announced the forthcoming release of Health Kit and a Health App to help people organize the myriad of health information collected from different devices and even from their health care providers.

At Tuesday’s announcement, Apple hinted that some features of the device hadn’t yet been announced, so more information about what its capable of is likely to be forthcoming.

Perhaps the most useful feature of the Apple Watch is its heart rate monitor. For casual exercisers, it probably isn’t critical. But for frequent exercisers who want to more accurately calculate calorie expenditure or stay within a target “cardio” or “fat burning” zone, it is a crucial feature.

Unlike a lot of fitness monitors out there, this allows the device to track your activity levels even when you aren’t doing things that specifically qualify as walking or running (which can be interpreted by devices like the FitBit as taking a lot of steps very quickly). So you’ll have a better shot of getting credit for things like your spin class, or biking. The device is not, however, waterproof. So swimming is out.

We also may not know for a while longer how accurate the heart rate monitor actually is.

The Apple Watch comes with a suite of apps aimed at keeping you more active. The watch helps you set calorie-burn goals each day, keeps track of your activity levels and reminds you to keep moving.

These features aren’t particularly hallmark — you can find them in a lot of fitness accessories already on the market — but they’re good to have.

There has been a lot of talk recently on this blog and elsewhere about the dangers of a sedentary lifestyle, particularly the silent killer that is sitting down. The Apple Watch, notably, can tell the difference between sitting an standing. If you’ve been sitting for too long, it will prompt you to stand up.

Given that the evidence suggests that breaking up sitting with moderate exercise could potentially be just as important as getting dedicated exercise in your day, this is an important and novel feature. While it won’t force you to take a walk, but standing alone might be enough of a reminder to keep moving.

Apple clearly wants to make it so that there is no need to use third-party apps along with its hardware. The device, in conjunction with your iPhone, is designed, according to the company, to keep track of your walking, running, standing and sitting. It helps you set goals, reminds you to move and marks your milestones and progress.

But regular exercisers probably already have their favorite digital workout companion, whether it is RunKeeper, Nike+ or any of the myriad other aids in the app store. For now, you will be able to share your information through the iPhone Health app with third-party fitness apps. And later this year, Apple will allow developers to create apps specific to the Watch, which may allow you to ditch the phone altogether on your next trip to the gym.

Sleep, like exercise, is all part of a healthy lifestyle, but the Apple Watch simply isn’t designed to help you with this. The device needs to be charged every night and is probably not that comfortable to sleep with. Other devices, again the FitBit or Jawbone, are better at tracking your sleep — and keeping a charge.