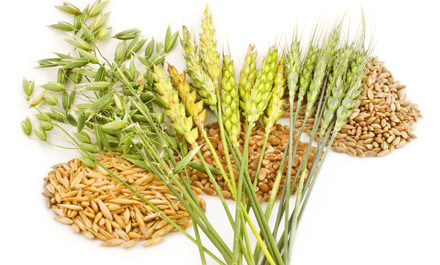 Some popular diet books say you should ditch wheat or gluten to shed pounds. But the USDA recommends eating grains daily, and at least half of those should be whole grains. Unless you have celiac disease, non-celiac gluten sensitivity or another reason to cut back, you don’t want to miss out on the health benefits of whole grains. “You’re getting fiber, a healthy plant-based protein, vitamins, minerals and a variety of phytochemicals that will improve your health,” says Lilian Cheung, DSc, RD, a lecturer in nutrition at the Harvard School of Public Health.

Whole grains have all of the parts of the original kernel — bran, germ and endosperm — in the original proportions, explains Keri Gans, a registered dietician in New York City. In refined grains, the bran and germ are stripped away. (Look for the word “whole” — either whole grain or whole wheat.) Also make sure the grain is one of the first three ingredients listed on the label, advises Wesley Delbridge, RD, a spokesperson for the Academy of Nutrition and Dietetics. A “whole grain” stamp from the Whole Wheat Council indicates there’s at least half a serving of whole grain inside. And don’t be fooled by bread that looks healthy because it’s brown. It may just be colored with molasses or brown sugar.

1. Whole grains can contain a lot of fiber

Fiber is one big reason to eat whole grains. Adults need about 25 to 35 grams of fiber daily, and whole grains contain two types — soluble and insoluble — which are both beneficial to your health. You’ll get 5.8 grams of fiber in two slices of dark rye bread, but only 1.9 grams from the same amount of white bread. And you’ll get 5.5 grams of fiber per 1/2 cup uncooked brown rice compared with 2 grams in uncooked white rice (which is not a whole grain), and only 0.7 in a serving of instant rice. Because it digests slowly, fiber also helps you feel fuller longer. And fiber’s health benefits are well known — it can help control blood sugar, lower LDL or “bad” cholesterol and reduce colon cancer risk. Not all whole grains are high in fiber, though. Focus on oats, barley and bulgur, says Delbridge.

Whole grains have other digestive benefits as well. The fiber content keeps bowel movements regular (studies have shown that people who eat more fiber need fewer laxatives). And they help ward off diverticulosis, the condition in which little pouches form in the colon wall, causing inflammation, constipation, diarrhea and pain. Fiber is responsible for much of the benefit, but whole grains also contain lactic acid, which promotes “good bacteria” in the large intestine. These organisms aid digestion, promote better nutrition absorption, and may even beef up the body’s immune system.

3. They can help lower cholesterol.

Whole grains not only help prevent your body from absorbing “bad” cholesterol, they may also lower triglycerides, both of which are major contributors to heart disease. In fact, whole grains lower the risk of heart disease overall. One study found that women who ate two to three servings of whole grain products daily were 30 percent less likely to have a heart attack or die from heart disease compared with women who ate less than one serving a week. “Any form of whole grain — including whole wheat, oats, brown rice, barley, corn, quinoa, rye, buckwheat and millet — will confer benefits for heart health,” says Cheung. “When it comes to oatmeal, steel-cut is better than instant.”

The heart benefits of whole grains don’t stop with cholesterol and triglycerides. They also lower blood pressure, one of the most important risk factors for heart disease. One study found a 19 percent lower risk of hypertension among men who ate more than seven servings of whole grain breakfast cereal a week compared with those who ate one or less. A study of women also found a benefit. “Eating whole grains instead of refined grains substantially lowers blood cholesterol … triglycerides, blood pressure and insulin levels,” says Cheung. “Any of these changes would be expected to reduce the risk of heart disease.”

5. They can help control weight.

People who eat a lot of whole grains are more likely to keep their weight in check and less likely to gain weight over time than those who eat refined grains. In one study, women who consumed the most wheat germ, brown rice, dark bread, popcorn and other whole grains had a 49 percent lower risk of “major weight gain” over time compared with women who favored doughnuts and white bread. Over the span of 12 years, middle-aged men and women who ate a diet high in fiber gained 3.35 pounds less than those with who went for refined products.

Even if eating whole grains doesn’t actually make you lose weight, studies have shown that it can help you cut down on the amount of body fat you have and lead to a healthier distribution of that fat. Specifically, eating whole grains can leave you with less belly fat — what scientists kindly call “central adiposity” — which increases your risk of diabetes and other health woes.

7. They make you feel full.

One way whole grains may help you control your weight is by making you feel fuller than refined grains such as cookies or white bread. “Whole grains take longer to digest and have a more satiating effect,” says Gans, who is also author of The Small Change Diet. This could also help keep your portions under control. Try rye or protein-packed quinoa to get maximum fullness.

One of the main benefits of whole grains is that compared to refined grains, they help keep your blood glucose from spiking, which can reduce your risk of type 2 diabetes, among other things. Women in one study who ate two to three servings of whole grains a day had a 30 percent lower risk of diabetes than women who ate little or no whole grain products. One analysis found a 32 percent lower risk of diabetes in people who ate three or more servings a day of whole grains versus a 5 percent risk reduction in those who ate refined grains. Something as simple as swapping one third of a serving of cooked white rice a day (about two ounces) for brown rice was associated with a 16 percent decline in type 2 diabetes risk. “Eating whole grains has been proven to have a protective effect against type 2 diabetes, so they are a smart choice for people with pre-diabetes or high risk of diabetes,” says Cheung.

Although whole grains aren’t generally an abundant source of calcium, one grain — a form called teff that is common in Ethiopia — does provide some calcium. One cup of cooked teff has about 123 milligrams of calcium, similar to a half cup of cooked spinach. Also look for calcium in broccoli, milk, yogurt and cheese and in fortified juice and cereals. Adult men and women should get 1,000 milligrams of calcium a day, according to the National Institutes of Health. Calcium is important for bone health.

As with calcium, whole grains aren’t your first go-to source for vitamin C, but you can get some of your recommended daily allowance from the whole grain known as amaranth. This grain, originating in Mexico and Peru, is also high in other vitamins and minerals including iron and packs a lot of protein, keeping you full longer. As for other sources of vitamin C, load up on cantaloupe, citrus fruits, broccoli and tomatoes.

11. They are a good source of B vitamins.

Whole grains are rich in the B vitamins thiamin, riboflavin and niacin, all of which are involved with metabolism. Another B vitamin, folate (folic acid), helps the body form red blood cells and is critical for preventing birth defects in babies. Whole grains can help, but women who are pregnant or thinking about getting pregnant need to take a multivitamin with 400 micrograms of folic acid a day. Bran is one good source of B vitamins, says Delbridge, who holds an adjunct faculty position at Arizona State University.

Along with vitamins, whole grains are a great source of the minerals our bodies need to stay healthy. These include iron, which transports oxygen throughout the body and helps prevent anemia, magnesium, which builds bones, and selenium, which protects against oxidation. They also contain zinc, necessary to keep your immune system in fighting shape.

13. They may reduce asthma risk.

Eating whole grains early in life may ward off asthma and other allergic conditions. One study found that children who were introduced to oats as infants were less likely to have asthma or allergic rhinitis by the time they turned five. A Dutch study reported similar findings among children aged 8 to 13. An overall healthy diet with more whole grains, fruits and vegetables and less meat, and refined foods may reduce asthmatic wheezing, says Delbridge.

14. They cut markers of inflammation.

Asthma is one inflammatory condition that may be eased by consuming whole grains, but there could be others as well. One study found that whole grain barley, brown rice or a combination of the two reduced markers of inflammation in the gut. Whole grains may also cut levels of C-reactive protein, a marker of inflammation that has been linked not only with heart disease and type 2 diabetes but also problems in pregnancy such as premature birth, preeclampsia and fertility problems.

15. They may even lower cancer risk.

Evidence is emerging that whole grain consumption may lower the risks of certain cancers, such as colorectal, breast and pancreatic cancer. Although the evidence is mixed at this point, what will definitely lower your risk of cancer, says Delbridge, is eating a diet that includes not only whole grains but lots of fruits and vegetables and not a lot of meat or processed foods.

16. They may protect your teeth and gums.

In a study of almost 35,000 male health professionals aged 40 to 75, participants who consumed the highest amounts of whole grain were 23 percent less likely to get gum disease than those who stayed away from whole grains. This was true even after taking into account other factors like smoking, age and body size. Since gum disease is linked to inflammation and other health conditions like heart disease, this is about more than just a pretty smile.

17. They may help you live longer.

Not only will whole grains help you live better, they may also help you live longer. One study of more than 40,000 postmenopausal women found that women who consumed four to seven servings a week of whole grains had a 31 percent lower risk of dying from causes other than cancer or heart disease when compared with women who had few or no whole grains in their diet. And it worked in men, too, with another study finding that men who consumed one or more servings a day of whole-grain cereal had a 17 percent reduced risk of dying than those who never or hardly ever ate it.

Carbs can be good for you. The trick is to find the right kind of carb and resistant starch is one. It’s a carb that acts more like a fiber. Because it’s not easily digested, it moves slowly through your digestive system burning more fat, stoking the hormones that make you feel full, maintaining your insulin in good working order and keeping blood sugar and cholesterol levels down. Try for 10 to 15 grams daily. Oatmeal, pearl barley and brown rice are all good whole grain sources of resistant starch, which is also found in green bananas and other non-grain foods.