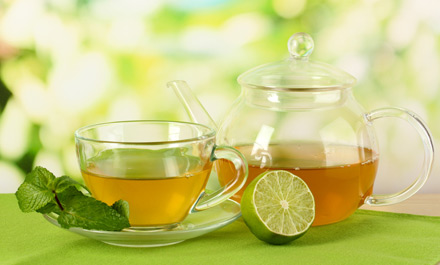 It has been shown to lower cholesterol, improve blood flow and protect against heart disease.

And now scientists believe green tea could be used to develop new drugs to fight cancer.

A chemical extracted from the beverage is an ideal carrier of proteins that combat the disease, according to research by the Institute of Bioengineering and Nanotechnology, Singapore.

Green tea is made up of a class of chemicals called catechins, the most abundant of which is EGCG (Epigallocatechin Gallate).

It is believed EGCG is responsible for green tea’s health benefits and could have anti-cancer effects.

Dr Joo Eun Chung and her colleagues have shown anticancer protein Herceptin can combined with EGCG to form a stable and effective complex to deliver a drug to a tumour site.

She said: ‘When designing drug carriers, the drug to carrier ratio is an important consideration because the use of high quantities of carriers can result in toxicity as a consequence of poor metabolism and elimination of the carriers.

However, these issues would be of less concern if both the drug and carrier had therapeutic effects. When injected into mice, the Herceptin loaded nanocomplex demonstrates better tumour selectivity and growth reduction, as well as longer blood half life, than free Herceptin.

‘It effectively protected the proteins against many obstacles from the point of administration to the delivery sites. The combined therapeutic effects of the green tea based carrier and the protein drug showed greater anticancer effect than the free protein.

The researchers injected the combination of EGCG and Herceptin into mice and found it was better at targeting tumours and reducing growth, as well as lasting longer in the blood.

It is hoped the finding reported in Nature Nanotechnology could help build better drug delivery systems.

When designing drug carriers several factors must be considered, including that it must be specific so it just attacks the cancer.

Using high quantities of the carrier could result in toxicity if the body cannot metabolise it.

The complex will be ineffective if the body attacks and eliminates it too quickly.