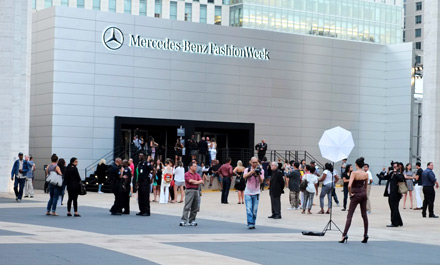 Mercedes-Benz Fashion Week’s biannual staging at Lincoln Center will come to an end with the Fall/Winter 2015 shows this February, marking the event’s last hurrah at the location, according to a settlement reached between park advocates and the city.

For the last five years in February and September, IMG Fashion, which runs the Mercedes-Benz Fashion Week, has turned the city-owned Damrosch Park into a sea of luxury tents that house runway shows for designers such as Anna Sui and Vera Wang. Damrosch Park is within the Lincoln Center area at West 65th Street and Broadway. Lincoln Center has had control of the park since 2010, according to the settlement.

“[Lincoln Center] shall not renew the IMG Fashion sublease agreement, which expires in February 2015,” read the settlement agreement finalized on Tuesday by Supreme Court Justice Margaret Chan, “and the City shall not approve the use of Damrosch Park for New York City Fashion Week after that date.”

New York City Park Advocates along with the Committee for Environmentally Sound Development filed the lawsuit in May 2013 against the Parks Department and Lincoln Center. The lawsuit labeled fashion week an inappropriate use of Damrosch Park. It also claimed that trees and planters were improperly removed for the event.

As a result of the settlement, the city will work with IMG to find a suitable location elsewhere in the city. An IMG spokesman said that Lincoln Center has been “a great home” and that it is currently looking for a new location. Previously, Mercedes-Benz Fashion Week was held at Bryant Park.

This is the latest blow to IMG’s fashion week concept. In recent years big name designer like Diane Von Furstenberg have shunned fashion week tents at Lincoln Center for unique locations downtown. The late Oscar De La Renta voiced his criticism to WWD in April 2013 about the so called “megashows” and slashed his runway show’s guest list to only those with a “legitimate professional purpose” at fashion week

In Dec. 2013, IMG announced that it would work to make its fashion week more exclusive to fashion insiders, shunning fashion bloggers and street-style photographers whose influence in fashion have grown immensely in recent years. IMG also attempted a satellite venue for young designers in February 2014 at the Hudson Hotel, but the concept disappeared by the September event.

Even though Lincoln Center manages Damrosch Park on behalf of the city, it’s still public land. New York Fashion Week is all about who’s “in” and who’s “out” — and when it comes to the tents, the general public is definitely “out.”

“Even though Lincoln Center manages Damrosch Park on behalf of the city, it’s still public land,” she said in a statement. “New York Fashion Week is all about who’s “in” and who’s out” — and when it comes to the tents, the general public is definitely “out.”

As part of the settlement, Lincoln Center is also required to replant shrubs and trees with a landscape plan that will be developed in consultation with Community Board 7.

Spokeswoman for Lincoln Center, Betsy Vorce, said in a statement that Lincoln Center is “pleased” with the decision as it “further solidifies Lincoln Center’s relationship with City government, neighborhood groups, elected official and the community.”

While the event has always drawn a celebrity crowd, Mercedes Benz Fashion Week has also drawn the complaints from the surrounding neighborhood for its noisy generators and damage endured by the park.