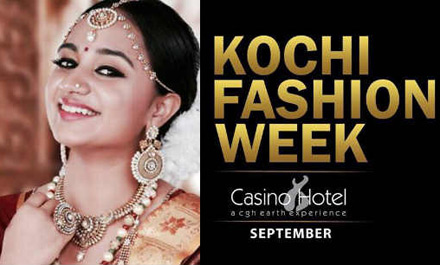 The resplendence that ruled day one of the Kochi International Fashion Week continued through Saturday. A riot of colourful embellishments blazed the runway. Models of international repute to desi starlets set the ramp on fire again with displays of creations by big names in Indian designer couture.

Fashion enthusiasts flocked in large numbers Saturday where the ball was set rolling by Julies Eidi Amin. The show themed ’Apple Pie and Candy Pop’ had none other than model and Bollywood diva Sonali Sehgal, taking the centre-stage. Julis presented designs that blended modern design themes with vintage hues. The rich yellow-orange ensembles, that bestowed a modern outlook to the costumes in sixties, had a lustrous sheen.

’Black-Magic’ presented by Jathin Kochar marvelled the new-age aesthetics of the classic black shades. Gowns formed the prime chunk of collections and along with accessories matching well with the staple shade, the catwalk catered a novel treat.

’Resort: 2011,’ by Chennai-based Malayali designer, Vivek Karunakaran, showcased glamouor-fabrics announcing the stately grace of square shapes. The jewel-neck dresses too were appreciated well. Some of the designs had exquisite border-works.

Riaz Ganchi, one of the frontrunners in the industry, grabbed attention through his exhibition of bridal wears that were never seen before. He featured designs for women which were in harmony with Indian traditions and men’s western, Indo-western collections. Connoisseurs had their fill as the show decked itself with presentations of traditional Indian ornaments.

With Miss India finalist and actress Shweta Menon walking into the spotlight of the last show, KIFW day two drew to a close. Another exquisite and sizzling evening ended!