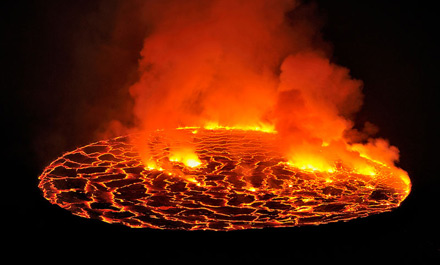 Heralded by fiery lava fountains and plumes of poisonous gas, a new lava lake has appeared atop one of Africa’s most active volcanoes for the first time in 75 years.

The lava lake at Nyamuragira volcano in the Democratic Republic of the Congo (DR Congo) simmers deep within the summit’s North Pit Crater. Though the churning lava seems to come and go, scientists think the volcano may eventually spawn a long-lived lava lake.

At the moment, “it’s a very small, bubbling lava lake,” said Benoit Smets, a volcanologist at the European Center for Geodynamics and Seismology in Luxembourg. “It disappears and reappears, but if the current activity continues, we will probably have a lava lake like we have at [neighboring volcano] Nyiragongo within a few years to decades.”

Both Nyamuragira and the neighboring Nyiragongo are part of the Virunga volcanic chain in the East African Rift near Lake Kivu and DR Congo’s border with Rwanda. The volcanoes are among the few on Earth that have sustained lava lakes for several decades. Nyamuragira’s last molten pool emptied in 1938 in spectacular fashion, with lava pouring out of the summit and flowing more than 18 miles (30 kilometers) to Lake Kivu.

Those rumbles opened a new route within the volcano for magma to travel up to the summit, akin to the volcano clearing its throat, researchers think. “We felt this was the first sign of a future lava lake,” Smets told Live Science.

The idea that a lava lake would form was also justified by the volcano’s pattern of past eruptions. Nyamuragira seems cycle its eruptions, with outbursts progressing in time from bottom to top. For instance, after the summit lava lake drained in the 1930s, the next eruptions were at the base of the volcano, Smets said. By the 1990s, eruptions were higher up, breaking through fissures close to the summit, he said. [History’s Most Destructive Volcanoes]

When did the lake form?

Nestled within Nyamuragira’s summit caldera, the pitlike crater and lava lake are often obscured by clouds of sulfur dioxide gas. Nyamuragira vents more sulfur dioxide than any other volcano in the world, said Robin Campion, a volcanologist at the Universidad Nacional Autónoma de México in Mexico City.

Campion said he thinks the sulfur dioxide emissions suggest the lava lake actually formed soon after the pit crater collapsed in 2012. Sulfur dioxide gas levels never dropped off after the 2011-2012 eruption ended, Campion said. “I noticed something was very strange, because I was constantly seeing that [sulfur dioxide] was quite high,” Campion told Live Science. “Only the formation of a lava lake could explain these high values.”

But Smets disagrees that the lake formed that long ago. In early July, United Nations peacekeepers dropped Smets and a group of scientists from the DR Congo, Belgium, Luxembourg and Italy off at the summit by helicopter, to check on the crater. They saw fire fountains spurting from the crater, but there was no lava lake there yet, Smets reported Oct. 21 in Eos, the weekly newspaper of the American Geophysical Union.

But Campion countered that the photos from that July helicopter survey actually show a fountaining lava lake. He noted that in Hawaii, Kilauea volcano’s lava lake was also filled with vigorous fire fountains soon after it formed. “I really think [Nyamuragira] is the early stages of a permanent lava lake,” he said.

Distant observers have also weighed in on the debate. Earlier this year, satellites picked up hotter-than-usual temperatures above Nyamuragira in April and late June, leading NASA’s Earth Observatory to conclude that a new lava lake had formed. The activity died down in August and then spiked again this month.

The summit also started glowing red at night in April and June, and scientists at the Goma Volcano Observatory — the Congolese scientific institute in charge of volcano monitoring — detected unusual earthquake swarms that are typical of molten rock (magma) moving underground during these months.

The back-and-forth reflects both science at work and the difficulty of working in the DR Congo, researchers said. Smets said the debate was finally settled this month, when Goma Volcano Observatory scientists saw an active lava lake during a Nov. 6 helicopter survey. Researchers often must rely on visual or satellite monitoring of DR Congo volcanoes because, for safety reasons, instruments often can’t be left in the field, Smets said. In the eastern part of the country, near the volcanoes, dozens of armed groups continue to fight, despite peace agreements. More than 21,000 U.N. personnel were in the country as of Sept. 30.

Eruptions at either Nyamuragira or Nyiragongo can threaten nearby towns, including Sake and Goma. On Jan. 17, 2002, an eruption from Nyiragongo destroyed much of Goma, leaving 200,000 people homeless. However, Nyiragongo is more of a hazard because it looms closer to communities, whereas Nyamuragira is surrounded by a national park, Smets said.

The more immediate threat from Nyamuragira is acid rain from its volcanic gas, which corrodes roofs, destroys crops and affects human health.