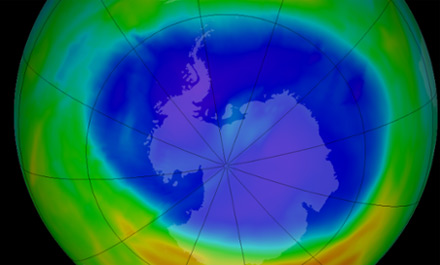 The Antarctic ozone hole, which was expected to reduce in size swiftly when manmade chlorine emissions were outlawed 27 years ago, is stubbornly remaining the size of North America, new data from Nasa suggests.

The hole in the thin layer of gas, which helps shield life on Earth from potentially harmful ultraviolet solar radiation that can cause skin cancers, grows and contracts throughout the year but reached its maximum extent on 9 September when monitors at the south pole showed it to cover 24.1m square km (9.3m sq miles). This is about 9% below the record maximum in 2000 but almost the same as in 2010, 2012 and 2013.

But scientists remain unsure why the hole has not reduced more since the Montreal Protocol agreement was signed by countries in 1987.

This global treaty is considered one of the world’s most successful, having been pushed through in record time. It bans the use of ozone-depleting chlorofluorocarbons (CFCs), substances that were widely-used in household and industrial products such as refrigerators, spray cans, insulation foam and fire suppressants.

“The ozone hole area is smaller than what we saw in the late-1990s and early 2000s, and we know that chlorine levels are decreasing. However, we are still uncertain about whether a long-term Antarctic stratospheric temperature warming might be reducing this ozone depletion,” said Paul A Newman, chief scientist for atmospheres at Nasa’s Goddard Space Flight Center in Greenbelt, Maryland.

“It’s broadly on track [to reduce in size],” said Dr Jonathan Shanklin, emeritus professor at the British Antarctic Survey in Cambridge, one of the three scientists who discovered the hole in the 1980s. “We knew it was always going to take a long time to recover because the CFCs were long-lived.”

He said the reason why it was not healing more quickly was because the interaction between climate change and the ozone hole was complex. “The ozone hole itself is affecting the climate of Antarctica and Australia, and is being affected by it. It is changing the wind systems.

Last month the UN Environment Programme (Unep) and the World Meteorological Organisation (WMO) said there were “positive indications” that the ozone layer was on track to recovery, but warned it might take a further 35 years or more to recover to 1980 levels. They said that without the Montreal Protocol atmospheric levels of ozone depleting substances could have increased tenfold by 2050.

According to Unep, by 2030 the treaty will have prevented two million cases of skin cancer annually, averted damage to human eyes and immune systems, and protected wildlife and agriculture.