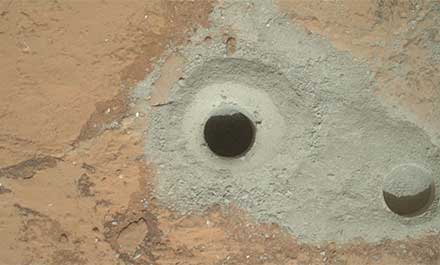 NASA’s Curiosity rover has been hanging out at the base of Mount Sharp on Mars for the last five months. Its latest task? To examine a sample of the mountain collected using a new chilled-out drilling technique. The rock target is named “Mojave 2,” and it’s already hinting at ancient environmental conditions in the area.

Curiosity had earlier attempted to drill a different rock, dubbed “Mojave,” but ended up breaking the sample, making it unsuitable for delivery to the rover’s analytical instruments. It had better luck the second time, and now preliminary results from “Mojave 2” indicate that this spot on Mars may have been host to some ancient acidic water conditions.

The big preliminary clue Curiosity discovered is a large amount of jarosite, a sulfate mineral that forms in acidic environments. The analysis of the sample is still ongoing, but it seems to indicate much more acidic conditions compared with what was found at other Mars drilling sites.

NASA scientists are wondering “whether the more acidic water evident at Mojave 2 was part of environmental conditions when sediments building the mountain were first deposited, or fluid that soaked the site later.”

NASA attributes the success of the sample collection at Mojave 2 in part to a new, gentler method of drilling. “This was our first use of low-percussion drilling on Mars, designed to reduce the energy we impart to the rock,” said John Michael Morookian of NASA’s Jet Propulsion Lab. “Curiosity’s drill is essentially a hammer and chisel, and this gives us a way not to hammer as hard.”

Curiosity had been attacking its rock samples with gusto, which may have contributed to the breakage at the original Mojave site, but a new algorithm takes it slow, starting at a very low percussion level. It took 10 minutes for Curiosity to drill 2.6 inches into the soft Mojave 2 rock.

The rover may have a go at collecting samples from other sites at the base of the mountain before climbing higher on Mount Sharp.