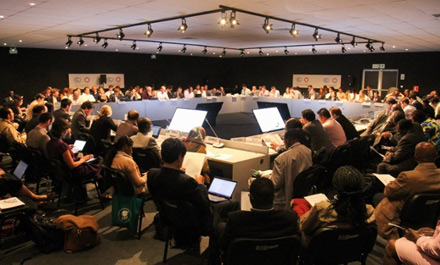 Negotiators working on a deal to fight climate change have agreed on just a single paragraph of text, casting a shadow over the prospects for a strong outcome in Lima.

The talks – scheduled to end at noon local time on Friday after 10 full days – are intended to provide a clear blueprint for a global agreement to find climate change by the end of next year.

But while negotiators descended on Lima in a positive mood, buoyed by recent commitments from the US and China, the talks have fallen into a rut.

“We are going backwards,” said Alden Meyer, who monitors the climate negotiations for the Union of Concerned Scientists.

Those at the talks still have every expectation that Lima will produce some kind of agreement by Friday evening, or more likely early Saturday morning – but the paralysis is in stark contrast to the upbeat backdrop to the summit’s opening.

“I am not really sure that we will see a clear outcome coming here in Lima,” said the former Mexican president, Felipe Calderon, who addressed the meeting.

By Thursday morning the text, which had started at a reasonable 6 pages, had ballooned to about 50, with negotiators throwing in their objections to almost every single clause. Just one section, paragraph 34, on countries intensifying engagement in the years up to 2020, has been agreed by negotiators.

In a successful negotiation, observers say that by this point officials would be whittling down to the final text to a manageable size.

“We have seen the laggards throwing in language of all kinds into the negotiating document,” said Tony de Brum, the foreign minister of the Marshall Islands.

At this late stage, it was expected the Peruvian hosts will take over from the bureaucrats and take personal charge of the negotiating texts to reach a successful conclusion by Friday or – going by the way events have unfolded in past meetings – somewhere in the pre-dawn hours on Saturday morning.

At contention in the talks are the old dividing line on how rich and poor countries should share responsibility for climate change: should all countries be required to do their bit to cut greenhouse gas emissions or only the industrialised countries?

The US and Europe have argued for years that all countries must do their bit. China, which last month reached an historic agreement with the US to cut carbon pollution, India and other countries are balking at this.

“You have got this weird dynamic where China has stood up with their president and president Obama and committed to putting forward economy wide commitments but their formal negotiating position is that those kinds of commitments shouldn’t happen,” Meyer said.

There is also deep division about the next critical phase of a move towards a climate deal in Paris: the March 2015 deadline for countries to announce what they will do to cut greenhouse gas emissions after 2020.

Developing countries are pushing the industrialised countries to include commitments to help poor countries deal with climate change. But the US and Europe argue it is impractical to expect commitments over climate finance in such a distant timeline.

An additional sticking point is monitoring of those pledges. China in particular is opposed to an official audit of its pledges. “Essentially China is saying ‘we will show you our cards but don’t read them’,” De Brum said.

The United Nations climate negotiations are by default a messy process. The task of herding 196 countries – rich, poor, oil producers or clean energy pioneers – towards consensus is never easy.

However, negotiators always in the end manage to produce some kind of a deal.

The risk for Lima however is that the deal could be much weaker than needed to curb warming to 2C above pre-industrial levels, the agreed goal of the talks.

“One of the fundamental flaws of the negotiations is the lack of a clear global goal for limiting global warming based on science,” said Lidy Nacpil of Jubilee South Asia Pacific from the Philippines.

“The Lima talks are setting us up to risk crashing that physical limit,” said Nacpil. “ If countries are not required to make legal contributions on finance and technology there will be no justice – and if there’s no justice there cannot be a deal.”

However, the meeting in Lima started in a buoyant mood, helped in part by pledges of nearly $10bn – including $3bn from the US – to the Green Climate Fund, a mechanism for rich countries to give financial aid to help the world’s poorest countries to cope with climate change.