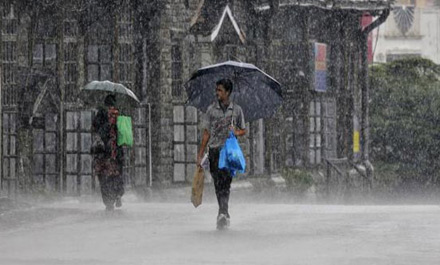 Heavy rains to continue in state till Sunday

As heavy rains lashed the state inundating many low-lying areas, the National Disaster Response Force (NDRF) has warned about the probability of landslides in the hilly regions.

Rains are forecast to continue in the state until Sunday. The NDRF team has alerted the police, fire force and revenue department about the chances of landslides.

Heavy rains have been lashing the northern districts of Kerala in the last two days, especially Kasargod, Kozhikode, Wayanad and Kannur districts.

In Kasargod, the district administration declared a holiday on Friday for all educational institutions including professional colleges, official sources said.

Heavy downpour has been reported from hilly regions of Irukkur, Peravoor, Irutty in Kannur district while Wayanad was also experiencing heavy rainfall.

In Kozhikode, the skies are heavily overcast with occasional heavy rains lashing the city. A few low-lying areas, including Pavamani road and Ashokapuram were inundated, they said.