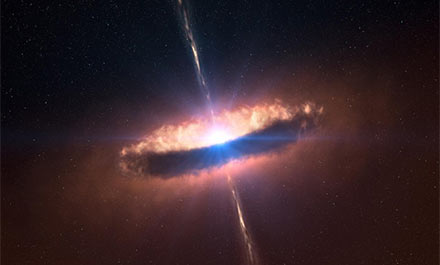 Astronomers have identified a mammoth black hole weighing as much as 12 billion suns.

It’s not the biggest black hole ever found, but it’s astonishingly young. The giant appears to have swelled to its enormous size only 875 million years after the big bang, when the universe was just 6 percent of its current age. That’s a surprise, astronomers report Wednesday in the journal Nature, because giant black holes are thought to grow relatively slowly by vacuuming up gas and even stars that venture too close.

“How do you build such a big black hole in such a short time?” asks Xue-Bing Wu of China’s Peking University, lead author of the study.

Wu and his colleagues didn’t see the black hole directly, since by definition it has such powerful gravity that nothing, including light, can escape from it. Instead, using telescopes in China, Hawaii, Arizona, and Chile, the team spotted a quasar, a powerful object lit by a brilliant glow of gas that heats up as it tries to squeeze itself into the black hole itself.

“This is the biggest monster we’ve ever detected in terms of luminosity,” says Avi Loeb, chair of the Harvard astronomy department, who was not involved in the research. It’s about 40,000 times as bright as the entire Milky Way, Loeb says.

All major galaxies, including the Milky Way, have massive black holes at their cores, but not all of these are surrounded by superheated gas. The ones that are are known as quasars. And here, too, the newly discovered object, known as SDSS J010013.021280225.8, is extreme.

Like all quasars, the new object looks like an ordinary star. It’s just a pinpoint of light, even through the most powerful telescopes. Only when astronomers analyzed the light in detail did they realize how fast it’s moving away from Earth, and thus how far away it is (in an expanding universe, the most distant objects fly apart from each other the fastest). That told them how long the light from the quasar has been en route to Earth: about 12 billion years.

The quasar’s extraordinary brightness tells the astronomers just how powerfully gas is being heated, which in turn tells them how astonishingly massive the underlying black hole is. “We’ve seen other quasars from this period,” says Wu, “but none of them has a mass of more than three billion times that of the sun.”

How to Build a Black Hole

Theorists believe the relatively modest giant formed when the first stars in the universe burned through their nuclear fuel and collapsed to form black holes, perhaps a hundred million years after the big bang. Those first stars were probably giants themselves, weighing in at a hundred times the mass of the sun. At that time, says Loeb, “galaxies were up to a thousand times denser than they are today,” so their tightly packed cores would have provided a lot of gas to feed the black holes, allowing them to swell.

But that scenario doesn’t work for the newly discovered black hole: It’s just too huge. “It must have been accreting gas at close to the maximum rate for most of its existence,” writes Bram Venemans of the Max Planck Institute for Astronomy in Heidelberg, Germany, in an accompanying commentary in Nature. That’s considered implausible because the blast of light from a brilliant quasar tends to drive off nearby gas that would otherwise fall in.

Another idea is that two or more galaxies merged together early on, their black holes coalescing into one. That would only work, though, if both black holes had the same mass. Otherwise, says Loeb, the imbalance would throw the new, single black hole aside.

Loeb offers another idea, however. It’s possible that at least some of the first stars had not a hundred solar masses, or even a thousand, but as much as a million suns packed into one. “There’s no fundamental limit on the maximum mass a star can reach,” he says.

If just a few such stars formed in the very early universe, then collapsed, Loeb explains, “they could jump-start the formation of very large black holes.” Add to that the fact that black holes may be able to swallow gas at a faster rate than theorists have long believed, Loeb says, and the existence of an object like the newfound black hole may not be so shocking after all.

The only problem with the jump-start scenario is that astronomers don’t know for sure that million-solar-mass stars ever existed. “We’ve never seen one,” Loeb admits. “But with the James Webb Space Telescope,” he says, which is scheduled to go into orbit in 2018, “we just might.”