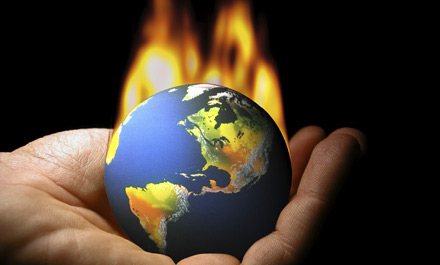 The double whammy of global warming and a growing, ageing population will mean peoples’ exposure to deadly heatwaves will multiply tenfold this century, according to a new report from the Royal Society.

The researchers from the UK’s science academy warn the world is not prepared for the extreme weather which is already being exacerbated by climate change today.

The world’s population is expected to swell from 7bn today to a peak of 10bn by mid-century, and the new analysis examines for the first time how this boom will affect the number of people hit by extreme weather, if the relentless rise in carbon emissions is not reversed.

The combination of population growth and climate change means the impacts of flooding around the world will be increased fourfold and drought impact will be trebled. The report also warns that failure to prepare for more extreme weather would cause huge economic damage, meaning entire nations having their credit ratings downgraded and major companies going bust.

Heatwaves are the climate impact most exacerbated by population changes, because they are particularly dangerous for people over 65 and the global population is ageing quickly.

The greying populations of UK and western Europe mean the region is particularly affected by this multiplication affect. In 2003, a 20-day heatwave killed 52,000 people across Europe but. Without action on climate change, once-rare heatwaves will happen every other year by 2100.

The US, China and north Africa will also be among those suffering from the magnified impact of heatwaves. The combined climate-population damage from flooding and droughts will be felt heavily in western Europe, while India and sub-Saharan Africa will be struck by all three types of extreme weather.

“Extreme weather has a huge impact on society and globally we are not resilient even now,” said Professor Georgina Mace, from University College London and who led the group of 24 physical, social and economic scientists. “This is why we have seen these horrible events [like typhoon Haiyan and hurricane Sandy] in the past few years, with many people affected. If we continue on our current trajectory the problem is likely to get much worse as our climate and population change.”

The damages are severe in both harm to people and property, the report stated. Extreme-weather damage cost $1.4 trillion (£0.9 trillion) from 1980-2004, of which only a quarter was insured. People in the poorest nations make up just 11% of those exposed to hazards but suffered over half the deaths from disasters.

Mace said the time to act to increase global resilience to extreme weather was now, as major international efforts to tackle climate change, disaster reduction and sustainable development all have deadlines in 2015.

“The good news is there are some solutions,” she said. She contrasted the 900,000 lives lost to floods in Odisha in India in 1999 with the 21 lost on 2013 when floods returned. Planning, defences and early warning systems had all been implemented after 1999.

Rowan Douglas, one of the report team and chair of the research network run by Willis Insurance, said developed countries need to act too. “The UK is comparatively well prepared for extreme weather, but it absolutely cannot afford to be complacent about maintaining that position.” Despite the UK government’s own scientists concluding that flood risk is rising, flood defence spending since 2010 has been cut.

Douglas said it was also vital that the cost of extreme weather damage is built into the world’s economic and financial systems, to ensure that long-term protection measures are seen as good value for money. He said the insurance industry had already been forced to change.

“What was an existential risk to the insurance sector is now, at the least, a material risk for the financial wellbeing of the wider economy,” Douglas said. “The credit rating agencies are seriously exploring extending techniques used to stress test insurance companies against extreme weather and disaster risk to corporates and potentially nations. They recognise there is a risk now that needs to be properly managed.”

Asked if countries or companies could have their credit ratings downgraded because they were not properly managing the risk of extreme weather to their economies or solvency, Douglas said: “Absolutely yes.”

Prof Andrew Watkinson, at the University of East Anglia and not part of the research team, said: “This timely report reminds us that extreme weather events affect us all, that we are not as resilient to current extreme events as we could be, and that the nature of extreme events is likely to change in the future. At a time when deep cuts are being made in public spending it is essential that government does not lose sight of its key role in enabling resilience.”