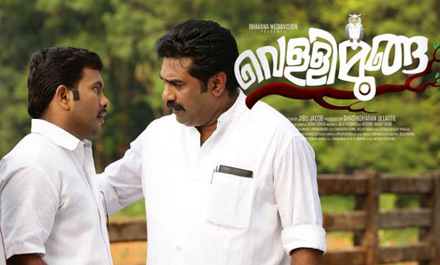 ‘Vellimoonga’ is a good film that provides a wholesome entertainment. It is the good old conventional Malayalam cinema sans the dreariness. The movie is a feel good entertainer that is sure to appeal to all. The movie carried with it no expectations, but delivers big time. It will have you rolling in laughter and neither is the laughter forced or artificially induced.  The humour is genuine. Though clichés abound and the story is predictable, the execution and narration lifts it.

The story revolves around a middle aged politician named Mamachan, played by Biju Menon. This ambling character with his owlish eyes gets a taste of the real significance of the white kadhar through some situations that he has to encounter. These situations actually act as a catalyst for his political and personal growth. When we say growth, it’s not altogether a straight one. All the characters that one encounters in this movie are crooked one way or the other. Mamachan is no exception. But it is his crookedness that endears him to the audience.

Because of this factor the movie does not come across as a didactic one. It does not get irritatingly preachy. In both his political aspirations and personal one, Mamachan uses the back door to get his way. After all, destination is what is important than the journey. In his political life he has a few things to achieve and a few scores to settle. In his personal life, in his ripe middle age, he is trying to win over a girl played by Nikki Galrani, again crooked means intact. Aju Varghese plays Mamachan’s trusted aide in the movie. Their unique relationship lends the movie much of its stellar moments, with the witty dialogues between them generating much laughter.

The performance of the cast is quite brilliant. Biju Menon is tailor-made for the role. Events relating to his real life like ‘Lalee la li…’ song are all hilarious. The Vellimoonga character suits him to the tee. Aju Varghese is perfect in his role. Both Biju Menon and Aju Varghese have wonderfully executed the comic sequences, with the timings perfect and expressions not over the top. Nikki Galrani doesn’t have much to do, but has done her part well. All the supporting cast and cameo by Asif Ali have all gelled well.

Jibu Jacob has presented a good debut movie and nowhere does it appear jarring. Joji Thomas has written the story and has handled the Screenplay of this movie. Script is smooth and the story well narrated. Comedy is not wildly exaggerated and stop short of becoming a mad caper. Repartee is well executed. The music and background gels well with the theme and feel. Editing is crisp. As the movie doesn’t project to be something extra-ordinary, the conventionality can be overlooked. All in all, ‘Vellimoonga’ is a pleasant watch and can end up becoming the surprise Blockbuster of the year!