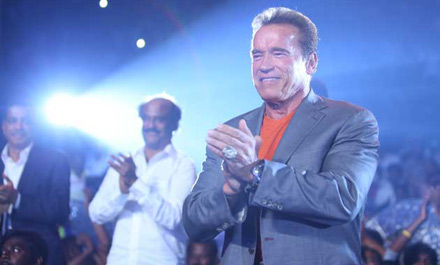 It can’t get bigger than this. The audio launch of the Tamil film ‘I’ was one of the biggest events seen in Indian cinema. ‘I’ is a big budget Tamil film directed by the showman of south cinema Shankar and has popular hero Vikram in the lead with music by Oscar winner A R Rahman. And producer of the rumoured Rs 180 Crore mass entertainer Aascar Ravichandran pulled off a major coup by roping in Hollywood action hero and former California governor Arnold Schwarzenegger as the chief guest at the audio launch along with superstar Rajinikanth.

Remember Arnold Schwarzenegger at 67 has a huge fan base in Tamil Nadu, where his films are dubbed into Tamil and has worked wonders at the local box-office. And ‘ I ‘producer Aascar Ravichandran who started as a English film distributor has marketed some of his hit movies and understands the Terminator star’s connect with the local audiences. Last month Arnie’s multi-starrer The Expendables 3, took a decent opening in Tamil Nadu thanks to his larger than life posters.

Aascar Ravichandran is a producer who thinks big and is a big budget survivor in Tamil films. Ravichandran’s calculated risk in bringing Schwarzenegger at a rumoured cost of Rs 10 Crore has enabled his film to get all the hype and hoopla surrounding the first look of the film. The slickly made trailer of ‘I’ has not only been appreciated but has also become an instant hit and has crossed 1 million views under 24 hours on Youtube, the fastest by an Indian film! Noted critic Rajeev Masand tweeted: “Shankar raises the bar again. Beauty & The Beast meets Phantom of the opera in this teaser”.

During his whirlwind tour of Chennai for ‘I’ audio launch Arnold Schwarzenegger was able to impress not only the local fans but also got a one to one meeting with Tamil Nadu Chief Minister J Jayalalithaa at the state secretariat in Chennai. Arnold’s meeting with Jayalalithaa lasted for 20 minutes and for the local media it was the biggest event of the year.

Arnold later wrote on his social networking site: “It was fantastic to sit down with Tamil Nadu Chief Minister Jayalalithaa before our event tonight and talk about her state’s success and challenges. That’s the advantage of being an actor who was also a Governor!” Schwarzenegger it seems had heard about Jayalalithaa and wanted to meet the chief minister, and his team and had sent a request to CM’s office much before his arrival in India.

Viswanathan Ravichandran is better known as Aascar Ravichandran, named after his production company Aascar Films, has once again done the impossible. He has given his mega tent pole film ‘I’ a huge boost and brand equity by flying down Arnold Schwarzenegger for its first look trailer and audio launch. Ravichandran is the Cecil DeMille of south cinema, a man who thinks big and truly a visionary when it comes to executing big budget blockbusters. Ravi as he is affectionately known had few years back staged a coup when he brought Jackie Chan to Chennai for the audio and teaser launch of his Kamal Haasan blockbuster Dasavatharam .

Ravi started life distributing English action movies mainly Jackie Chan and Arnold movies in Tamil Nadu in early 1990’s when Hollywood movies could be imported and distributed. He was the first distributor to put a 80 feet cut – out for a Jackie Chan movie outside Alankar theatre on Mount Road in Chennai. After making big money out of Hollywood actioners, Ravi branched out into Tamil film production. He specialises in making mass masala big budget star spangled movies like Ramanna, Anniyan, Dasavatharam, Vaaranam Aayiram, Velayudham which has a huge reach in B and C markets.

For a man who believes in hype and hoopla, Ravi is extremely low profile and will not allow his own photograph to be taken and nor does he attend his audio launches! The guarded Aascar Ravichandran told First Post : “I believe in aggressively promoting my films, but I should remain in the background. My films and its content and grandeur should hog the limelight not me. The audiences come to see my film based on our company’s brand name known for making mass entertainers.”

If all goes well Ravi will be making a foray into Hollywood as he is in talks with Arnold Schwarzenegger and Jackie Chan to make an independent English film which is likely to be backed by an American studio.

The Shankar directed I after its teaser launch became the hottest film in the southern circuit. Remember Shankar’s last release Rajinikanth Enthiran (Robot in Hindi) is said to have made more than Rs 200 Crore for its producers. Shankar specialises in making spectacular movies with terrific state of art special effects and a story which appeals to all sections of the audiences. WETA studio known for providing special effects to films like Lord of the Rings has worked with Shankar for I. The make-up of Vikram as a werewolf and the special effects seen in the teaser is simply awesome.

At the audio launch of I, Shankar explained: “ I is not like Hulk or Wolfman and definitely not a sci-fi film. It is an entirely new genre for me – romantic thriller. The character that Vikram plays is a body- builder and Arnold was my inspiration.” The film will be dubbed into Hindi, Telugu, English and Chinese. Nearly 25 percent of the film has been shot in China. Ravichandran is planning to release the romantic thriller in 3,000 screens worldwide.

Arnold at the end of his Chennai tour tweeted: “What a fantastic event in Chennai for the audio release of “I.” To the incredible fans in India – thank you, thank you, thank you.” On stage during the audio launch Arnold said: “I’m very impressed by director Shankar’s work. I thank him for giving the body builders a job in the movie.

How about me? I would love to do a film with Shankar.” Later Arnie got up half way through the programme and disappeared from the venue, not before saying his famous punch line – “I will be back!”