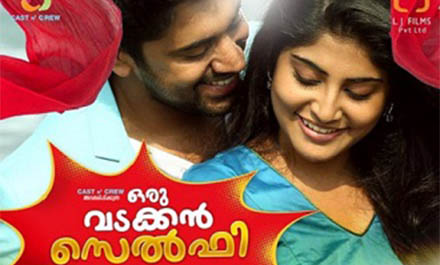 Oru Vadakkan Selfie is an enjoyable film with lots of laugh out loud moments.

Umesh (Nivin Pauly) is a Carefree engineering student, who has 42 back papers to clear. His close pals are Shaji (Aju Varghese) and Thankaprasad (Neeraj Madhav).

Wanting to find a quick way to money and fame he decides to try his hand in movies and sets out to meet renowned director Goutham Menon. Umesh boards a train to Chennai in which Daisy, his neighbor, is also travelling.

However upon returning home, Umesh finds himself at the center of a controversy. Along with Shaji, he sets out to Chennai to clear his name. There they encounter Jack Tracker (Vineeth Sreenivasan), a private detective, who offers to help solve the mess they are in.