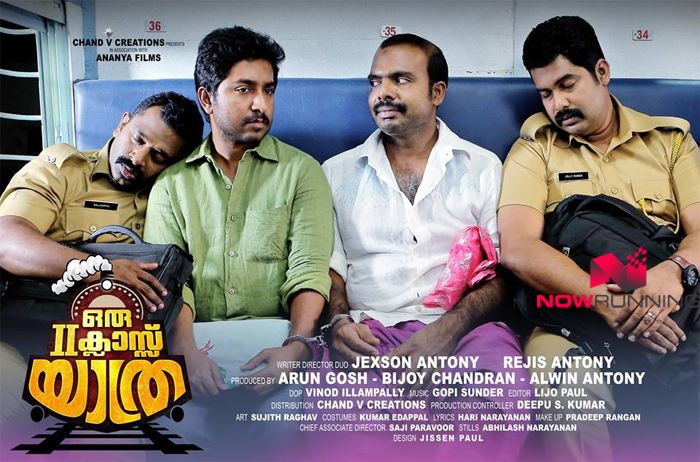 Police constables Balagopal (Sreejith Ravi) and Jolly Kurien (Joju George) have been at odds for years but are under orders to transfer two prisoners from Kannur to Trivandrum. They board the Parasuram express with the handcuffed inmates. While at the Kayamkulam station, prisoner Nandu (Vineeth Sreenivasan) escapes. The two officers get off the train at the next stop with second inmate Maran (Chemban Vinod Jose) and frantically searches for Nandu. The three unlikely musketeers finds the back-story of Nandu. Nandu’s father, Narayanan (Nedumudi Venu) always have a wrongful intention to his step-sister, Lakshmi (Nikki Galrani). Nandu, one day determines to kill his father for the same, but the trap he set accidentally killed his mother. He was arrested for his mother’s murder. One day his Narayanan comes to visit him at jail and reveals his true intentions for his step-sister. Nandu determines to escape at any possible opportunities. The three musketeers finds Nandu while roughing with Narayanan , both with the intention to kill. Aaccidentally Jolly Kurien kills Nandu’s father. With knowing Narayanan’s story, Maran devises a plan to not let the issue known to others, to which everyone agrees. Narayanan’s body is buried in a nearby church cemetery at that night itself. In the end of the day everyone is shown as happy in their karmic lives.

Though touted to be a thriller, ‘Oru Second Class Yathra’ sets a very sedate pace, contrary to the usual thriller recipe.  The ingredients are more or less the same – an unusual and unexpected villain, a wronged hero, the revenge, the chase and the justifications for retribution. ‘Oru Second Class Yathra’ also has an unlikely flavor, which is comedy, which makes the movie stand out. It is not a bad attempt and is very much a family movie and the subject of rape of a different nature is very relevant. Watch it without much expectation and you might be pleasantly surprised.