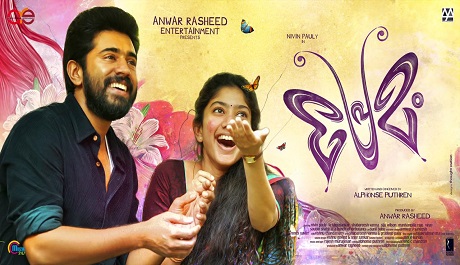 Nivin Pauly’s latest release “Premam” is said to be the biggest blockbuster of the year.

The film earned a gross of ₹1.43 crore (US$230,000) in Kerala in its first day of release.
The film collected ₹2.35 crore (US$370,000) crore within the first four days of release.
It collected ₹4.5 crore (US$710,000) at the box office in the first week in India, say its producers.
P.
V. Basheer also said that the film “would have earned a gross of about
₹5 crore in a week of its release, with a distributor share close to ₹3
crore.
Trade analyst Sreedhar Pillai reported results as high as
₹10.3 crore (US$1.6 million) as the film’s collection in Kerala alone
within the first week of release, adding that it broke the previous
records of Drishyam and Bangalore Days and emerged as the biggest box
office success of 2015 till date.

Some unofficial sources are
suggesting the film grossed ₹2 crore (US$320,000) in Sunday (7 June)
alone, making it cross ₹15 crore (US$2.4 million) in its second week in
Kerala. Trade sources said the earnings doubled in the second weekend
from the first weekend.

Premam is a romantic comedy-drama film written, edited, and directed by Alphonse Putharen. Produced by Anwar Rasheed under Anwar Rasheed Entertainment, the film stars Nivin Pauly, Madonna Sebastian, Sai Pallavi, and Anupama Parameshwaran in the lead roles along with a supporting cast consisting of Shabareesh Varma, Krishna Shankar, Vinay Forrt , Soubin Sahir and Deepak Nathan. Rajesh Murugesan composed the music and background score. The cinematography was handled by Anand C. Chandran. The film released on 29 May 2015 to highly positive reviews.

Premam is obviously a love story, as the title suggests. George David (Nivin Pauly) is a happy go lucky guy. He is in love with a girl named Mary (Anupama Parameshwaran). He is aided in his love by his friends Koya (Krishna Shankar) and Shambu (Shabareesh Varma). He follows Mary and her younger sister Celine (Eva Prakash) everyday but fails to propose to Mary. Finally, he decides to propose to her one day, but he then realizes that Mary is already in love with another guy, who is also named George. George is then left heartbroken.

Years later, George and his friends joins college. While ragging newcomers, George meets Malar (Sai Pallavi), a new teacher in their college who is a Tamilian. He instantly falls in love with her despite the teacher-student moral issue. After a rough start, George with his friends befriends Malar. This relationship paves an open road to George’s infatuation and love. Malar and George begins a casual relationship. One day, Malar goes to visit her home with her cousin. Later George hears the news that Malar and her cousin met with an accident and in the shock lost her immediate memory. He goes to visit her at her home but is left heartbroken when she doesn’t recognize him. Eventually, Malar marries her cousin.

A few years later, an adult George now runs a cafe with his old friend Jojo (Wilson Joseph). One day, a girl (Madonna Sebastian) comes to their shop for buying a birthday cake. She later reveals to George that she is Celine, Mary’s younger sister. A despondent George feels hope and confused with the friendliness between them as a spark and decides to propose her. But he is once again left heartbroken when she reveals that she is engaged to a guy named Roney (Alphonse Putharen). Later it is known their engagement is cancelled, because Roney insults Celine after substance abuse. George and his friends go to Roney’s place and beat him up for affronting Celine. In the end George marries Celine and comes to know that Mary is also married. Later, they are visited by Malar and her husband and it is revealed that Malar has regained her memory.

The original soundtrack and background score were composed by Rajesh Murugesan, who had collaborated with Alphonse Putharen in the film Neram.