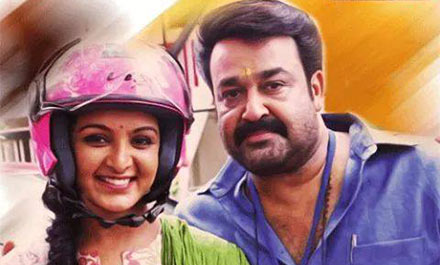 Sathyan Anthikkad’s film to be released for Vishu has been named ‘Ennum Eppozhum’ where ace actors Mohanlal and Manju Warrier come together.

The much awaited movie is scripted by Ranjan Pramod. Antony Perumbavoor produces the movie under the banner of Aashirwad films.

Sathyan Anthikkad as usual had kept the title of the film a suspense till the last moment and many names were doing the rounds over a period.

“Ennum Eppozhum” will see Mohanlal play the role of ‘Vineeth’, a negligent reporter of a leading women’s magazine who lacks commitment to his work. He comes late to office and is lazy. To make things worse, his new boss ‘Kalyani’ (Reenu Mathews) is planning to fire him from his job.

Manju Warrier plays ‘Deepa’, who is exactly opposite to him when it comes to commitment to work. She plays the role of a socially-committed family court lawyer.

The film talks about how these two individuals, who are poles apart in character, meet by destiny and the troubles they face in adjusting to each other.

The movie also has Innocent and Lena in pivotal roles. The script of the movie has been written by Ranjan Pramod and the cinematography is by Neil D’Cunha.

The music of this much-awaited entertainer is composed by Vidyasagar and has three songs penned by Rafeeq Ahammed.

The upcoming movie is produced by Antony Perumbavoor under the banner of Aashirwad Cinemas and is expected to hit theatres by December end.

Innocent, Lena, Rinu MAthews are the other actors.