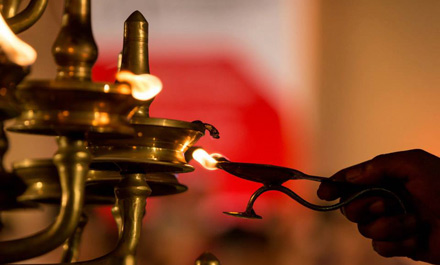 The spirit of the Kochi Muziris Biennale (KMB) was at its peak Friday evening when amid heavy showers, Kerala Chief Minister Oommen Chandy officially inaugurated the 108-day long festival.

Muziris Biennale is an international exhibition of contemporary art held in Kochi, Kerala.

The evening began with a two-hour traditional ensemble featuring 305 artistes playing ethnic drums, cymbals, pipes and horns. In the middle of their performance it began to drizzle, followed by a slow and continuous rain. Yet the guests remained seated and watched the performance from under umbrellas.

However, when the chief minister along with a few other dignitaries arrived, heavy showers lashed the venue, but they all chose to speak about the second edition of the art festival, braving the rain.

“Kerala has of late become a major gateway of arts for the whole world,” said Chandy.

“Each artwork at the biennale is a wonder in itself,” he added.

The chief minister also said the state government was considering giving the KMB grants more than the Rs20 million (Dh1.17 million) which they had provided for in this edition.

Kerala Culture Minister K.C. Joseph ended the ceremony on a lighter note saying “we began with rain, will end with thunder”.

Titled “Whorled Explorations”, this edition has been curated by Mumbai-based artist Jitish Kallt who has delved with the theme of astronomical spaces and maritime history of the port city to merge its historical past with a mystical future.