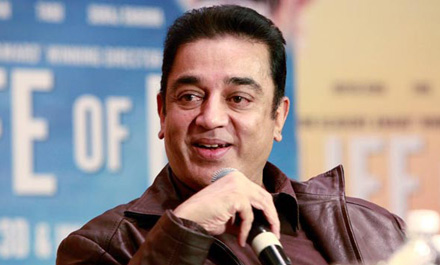 Actor-filmmaker Kamal Haasan-starrer, the yet-untitled Tamil remake of Malayalam blockbuster ‘Drishyam’, will go on the floors from the first week of August. The film was launched here recently.

‘Kamal Haasan and other important members of the film recently participated in the launch. The regular shooting is expected to start from the first week of August,’ read a statement.

Jeetu Joseph, who helmed the original, has been roped in to direct the Tamil version as well. Actress Meena is likely to play the female lead opposite Kamal in the film, jointly produced by Suresh Balaje, George Pius of Wide Angle Creations, Raj Kumar Sethupathy and Sripriya Rajkumar of Raj Kumar Theatres Pvt Ltd.

Ghibran has been signed to compose the tunes for the film, which will mark his third collaboration with Haasan in a row after ‘Vishwaroopam 2’ and ‘Uttama Villain’.

‘Drishyam’ has already been remade in Telugu as well as Kannada.