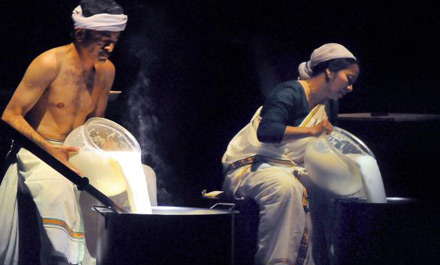 Launched in 2008, the International Theatre Festival of Kerala (ITFoK) operates as one of the major theatre festivals of India. ITFoK is organized by Kerala Sangeetha Nataka Akademi; the nodal body for promotion of theatre, music and allied performing arts of Kerala. Akademi is an autonomous institution under the Department of Culture, Govt. of Kerala. Conceived during the chairmanship of late actor Murali as an annual theatre festival for independent, experimental and contemporary theatre groups from across the world, ITFoK has been elevated to a major cultural event of international appeal and repute. Today it ranks among the most important Indian theatre festivals. Spanning eight days ITFoK takes place at the site of the Akademi in Thrissur, the cultural capital of Kerala. Precise and well-calibrated, curatorial exercise behind every edition has given a definite character to ITFoK. Open-air performances and shows of Kerala’s own traditional theatre connecting local contemporary practices are other highlights of the event.

27 January – 3 February 2014 marks the sixth edition of the festival. Over twenty different productions are on schedule for this highly anticipated event, showcasing the work of international theatre artist from eleven different countries including Germany, Czech Republic, Slovakia, Poland, France, Italy, Israel, Iran, Norway  Sri Lanka and India.  In addition, ITFoK will host Colloquium with scholars of international repute and IATC symposium with theatre critics and scholars.  Other highlights of this year include Director in Conversation, Music & Poetry Crossover, Traditional Theatre (Yakshaganam & Lavani/Tamasha) and a special, one of a kind, collaborative theatre production, Burning Flowers. Another unique attraction in this edition originates from Sri Lanka, the Janakaraliya Tent. This tent theatre will be the fourth venue at ITFoK and is supported by India/Srilanka foundation.  In fact, there will be many performances in outdoor spaces to enjoy.