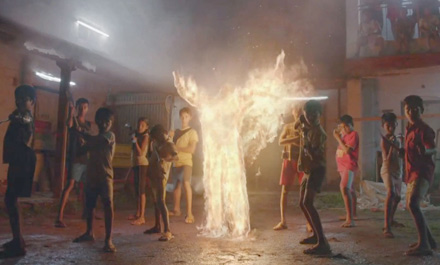 VICE’s electronic music and culture channel Thump debuted producers Just Blaze and Baauer’s music video for “Higher,” which invaded eardrums in January and featured some lines from none other than the holder of hip-hop’s Holy Grail, Jay Z.

The video, released Tuesday, was directed by Nabil and showcases sword-slashing montages of ancient martial-arts scenes, with the trio’s music set as an adrenaline-pumping soundtrack, though neither the producers nor Jay Z make an appearance. Watch above as a drunken, enraged warrior slices his mirror reflection in half, a scene that sets the stage for sparring, weapons training and eventual vengeance.

A visual tale of the unlikely underdog, Nabil’s video meshes with the beats for an entirely captivating six minutes of mayhem, resounding with Hova’s own battle cry: “I will not lose.”

The director behind the visuals reportedly trekked out to Kerala, India, to shoot Kalaripayattu warriors and warriors-in-training.

Baauer is most known for his song, “Harlem Shake,” which is the music featured in the viral “Harlem Shake” video meme. In February, the song catapulted to number one on the Billboard Hot 100 after Billboard added YouTube views to its rankings methodology.