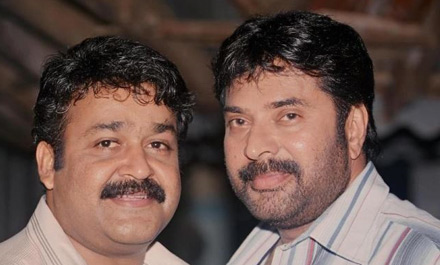 It’s never happened in the Malayalam film industry before! Five towering personalities — Mammootty, Mohanlal, Renji Panicker, Ranjith and Shaji Kailas — will join forces for a Malayalam film that will hit the screens next year.

Speaking to IANS, Panicker said things are falling in place.

“Renjith and I will be doing the scripting, while Kailas would be directing it. We have already got the confirmation from Mohanlal and with regards to Mammootty, we are meeting him shortly. We do not see any hitch, as he is always the one who is willing to take up challenges, especially when it comes to doing what he knows best — acting,” said Panicker.

“At the moment, this is all what can be made public for professional and commercial reasons,” added Panicker, who is now a reasonably busy actor too.

Even though all the five personalities are in a league of their own and have worked very hard to reach this stature, there will be no space for the egos that they carry, when they work together for their first love, which is good cinema.

The last time that the two superstars shared the screen space together was in 2008 for “Twenty:20” when the Association of Malayalam Movie Artists (AMMA) wanted to raise funds. It was a runaway hit that broke all records.

Ranjith today is perhaps currently the busiest film personality in the industry. After starting out as a scriptwriter, he has turned into a hugely successful filmmaker and even as an actor, he’s made a name for himself. Two of his films — “Munnuariyupu”, as a producer and “Njan”, as a director, are currently running in the theatres.

Coming to director Kailas, he has directed Panicker’s scripts for films like “Dr. Pasupathy”, “Ekalavyan and “Commissioner”, and with Ranjith in “Aaram Thampuran”, “Narashiman” and “Valliettan”. These films turned out to be super hits, while Kailas has also handled both Mammootty and Mohanlal with ease.

The trio of Panicker, Ranjith and Kailas are in the process of working out an action plan and they have already roped in Aashirvad Cinemas to be the producer. The banner has, in the past, produced most of Mohanlal’s blockbusters.