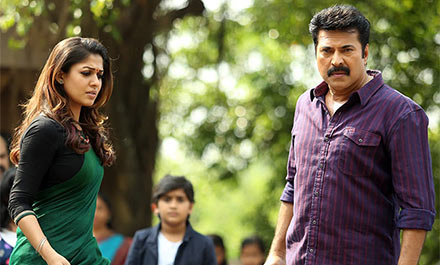 ‘Bhaskar The Rascal’ – Family Blockbuster Running Successfully All Over India

Bhaskar The Rascal is a 2015 Malayalam film directed by Siddique featuring Mammootty and Nayantara in the lead roles. Produced by Anto Joseph under the banner of Anto Joseph Film Company, the film released on 15 April 2015. According to an industry source, the film got the biggest opening for a Malayalam film in 2015 as per April.

Bhaskaran Pillai (Mammootty) is a business tycoon. After completing his studies from abroad he does banking business in his native place. His father Sankara Narayanan Pillai (Janardhanan) was also a big business man once. But when his business fails he has to go through financial crisis resulting all his relatives and friends abandoning him. His son Bhaskaran Pillai was the one and only pillar of support. Since then Bhaskaran’s sole aim is to create and amass wealth. His business empire is the result of his hard work. Though he has everything as he wishes, he is unhappy. He is so impatient that he reacts harshly to anyone who does something which he does not like. He is like a thug. This behavior earns him the name Rascal. Bhaskaran is a widower and the father of a son (Master Sanoop). Sankara Narayanan Pillai always pressurises Bhaskaran to marry again. But he is not ready. Once Bhaskaran along with his son go for a trip. He comes across Hima (Nayanthara), who is very close to his son. Hima, who does her own business, is a calm and quite person. The events that follow are plotted.

Knowing Siddique, one can look forward to a feast of laughter.